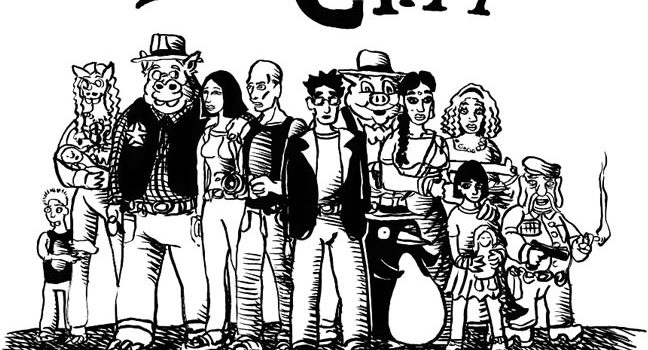 When I reviewed Matthew Brown’s Architecture Department last year in Indie Penance #8, I wrote that I “didn’t have a much better idea of what it was about as I reached the final page. But that didn’t stop me from loving the book and wanting to read it again soon.” Well, Brown has once again evoked a state of befuddled joy with The Cliff, his second book set within the titular vertical world.

While I believe it began life before Architecture Department (Brown’s Master’s of Architecture thesis forged into a graphic celebration of design), The Cliff continues the world constructed within that book, and is a similarly existential passage through a world of improbable structures and allegorical personalities. The plot, for what little justice summarising it can do, follows mafia prince Mutt Blue, whose desire to explore the lower levels of the Cliff sees him exiled from his family and commencing a journey of self-discovery. In an increasingly surreal adventure that seems to take as many elements from Samuel Beckett and Lewis Carroll as it does Cerebus the Aardvark and Peanuts, Mutt finds love and friendship, explores the dark secrets behind his heritage by visiting Earth under the protective wing of a detective penguin, and discovers that you truly can never go home again.

A labour of love that took 13 years to complete, The Cliff is comprised of a “cycle” of five books with a discernable 7-year gap between the first and second instalments. It’s fascinating to see the shift in Brown’s art style and approach to storytelling here; his work is often rudimentary in places and defiantly inconsistent, and therein lies its charm. The Cliff feels raw and personal in places, yet equally detached through its heavy surrealism and symbolism in others; a potently esoteric concoction that lends the plot the mystery of a labyrinthine puzzle. At times, it’s apparent what the author is alluding to, but then the story will take a sudden turn into territory so unexpected that you’ll doubt your initial interpretation. As with Architecture Department, I finished the book convinced that I’d appreciated it merely on surface level and would only glean more on future visits. The Cliff is for a very specific kind of comic book reader. If you’ve made it this far into the review then you probably know whether or not that’s you. If you’re tired of the same old genre crap, and ready to embrace work that marches to the beat of its own drum, then you owe to yourself to check out Matthew Brown’s work. In an era where so many talented artists and writers limit themselves by producing work for a pre-existing audience, Brown is that rare creator confident enough to take the sort of risks in his storytelling that defy reader expectations. Not all those risks pay off – certainly the Earthbound portion of the story didn’t grip me as much as the Cliff sections that bookend it – but the medium is far richer for those few brave comic creators slinging the tangled inner workings of their heart and mind onto the page with abandon.

Check out Matthew Brown’s books and other autobiographical works at www.ambientzero.blogspot.co.uk.