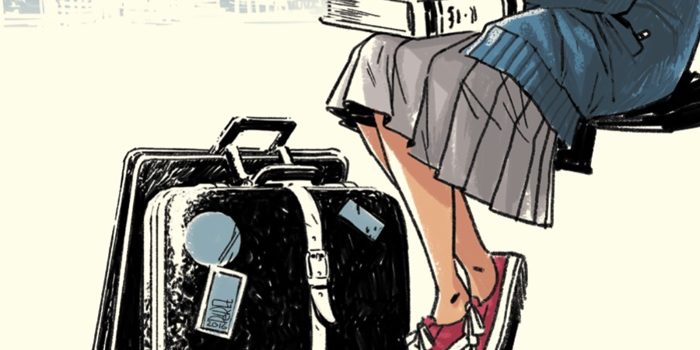 McKenna’s take on Eyre sees Jane hit the big apple, escaping an impoverished childhood for artistic ambitions. To pay for art college, Jane takes a job as a nanny for Adele, daughter of the elusive Mr Rochester. Through her attachment to Adele, our aspiring illustrator is drawn to both the enigmatic businessman and the secret behind his luxury apartment’s guarded room, which she is forbidden to enter. I should perhaps state that I’ve not actually seen any of McKenna’s aforementioned works, and in all honesty Jane probably wasn’t written with me in mind. Nevertheless, this is a slickly told adaptation, and McKenna’s characters and plot soon establish their own identity. In fact, I have to question why she used the names Eyre and Rochester, as the narrative swerves so forcefully in its own distinct direction that this is far more a modern-day tale (albeit with a generous dose of forties’ style and noir genre tropes) inspired by Brontë’s novel than it is a faithful adaptation. And all the better for it, I felt.

Ramón Pérez’ art is stunning throughout, and Irma Kniivila’s colours are implemented with a level of artistry and thoughtfulness that consistently took me unawares. Throughout the book, Jane’s artwork and backstory blend into one, as Pérez proves his versatility again and again. I’m not usually a fan of such modern adaptations – though there are always exceptions – but this metafictional element gives Jane a clout that, alongside McKenna’s solid pacing, won me over just a few pages in. One issue I do have with McKenna’s update, however, is the question of how well the sexual politics of the source material line up with contemporary mores. While the novel is indeed considered progressive for its time, several of the core elements feel somewhat antiquated in translation, such as the headstrong Jane’s blind devotion to Rochester despite his hostile, at times spiteful, behaviour. McKenna offers several twists on the source to counter this issue, and Jane initially enduring Rochester’s rancour due to her bond with Adele is arguably motivation enough. But again, I’m not the target audience for this book, who I assume will far more forgiving of Jane’s blind devotion to the mysterious and wealthy love interest, and embrace the story’s old-fashioned romance in the name of fantasy. Just I am willing to suspend my disbelief when it comes to the conventions within my own favoured genres. I digress. Jane is a solidly entertaining read, told with the precision you’d expect from a respected screenwriter and illustrated with a raw passion that brings the central romance to life with a soulfulness and authenticity that comics seldom achieve. Plenty of graphic novel adaptations of literary classics hit the shelves every month, and so many seem published simply to make a quick buck off of recognisable public domain classics. This isn’t one of them.