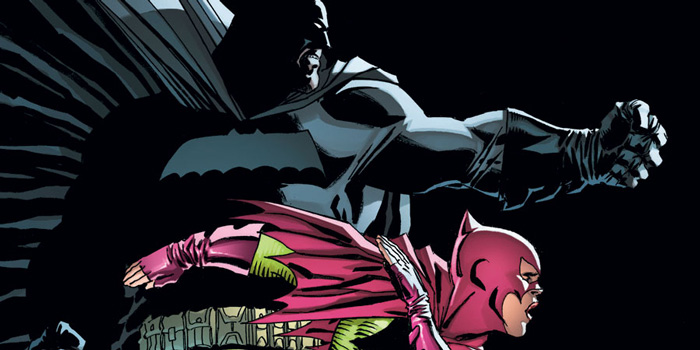 Comic books lend themselves to hype and hyperbole, but I can’t recall the last time a Marvel or DC series carried the weight of such lofty expectations as Frank Miller’s second sequel to his seminal The Dark Knight Returns, entitled The Master Race.

The 1986 original has become a classic within both its medium and genre, inspiring a generation of subsequent creators, and yet there’s no denying that Miller’s career hit a downward spin a fair few years ago. 2001’s The Dark Knight Strikes Again was an ugly, lazy mess that seemed to understand nothing of what made the original so special. All Star Batman and Robin, the much (and fairly) maligned Holy Terror and movie bomb The Spirit all suggested a writer whose best work was long behind him. Whether it was through choice or at the behest of DC, Miller’s teaming with Brian Azzarello was clearly a positive direction for this franchise of sorts. The combination of both writers’ knack for hard-boiled dialogue, Azzarello’s immaculate pacing and Miller’s tendency towards admirably outlandish story concepts, tied up in a neat little package by the equally formidable Andy Kubert, is at its best a return to form… and at its worst still better than anything since Strikes Again.

Three years have passed since Bruce Wayne toppled Lex Luthor and seemingly died for the umpteenth time. Superman remains frozen in his Fortress of Solitude, Wonder Woman is raising a baby boy far away from man, and former Robin Carrie Kelly is doing her best to keep the legend of the Batman alive. Clark and Dana’s daughter, Lana, however, has developed a bit of a God complex, and has enlisted the help of Ray Palmer, the Atom, to restore the residents of the bottled city of Kandor to their former size. A good deed that does not go unpunished when Palmer unwittingly unleashes a kamikaze cult of super powered Kandorians on the world.

Oh, if only there were some kind of Justice League to stop them…

In some ways, The Master Race is the sequel that the original demanded, in other ways it feels like an attempt at serialisation of a work revered for its standalone storytelling. But it’s certainly a more natural extension of the original than DK2, in which endless characters were shoehorned into an already convoluted tale. Aquaman, Green Lantern, Hawkman, Hawkgirl and various others make cameos in The Master Race, but this is Batman’s story through and through. DC superstar Andy Kubert finds a striking balance in his art, with far beefier character designs than his usual style, his pencils brought to life by Klaus Janson’s familiar bold inks. Together they make The Master Race look every bit a modern mainstream DC title and a sequel to Miller’s less conventional vision. This is undeniably an event title, full of stunning splash pages, but Kubert delivers just as well during The Master Race’s rare moments of calm between Bruce and Carrie.

Miller’s trademark collages of media reactions also return in force, with a cacophony of social media outbursts often drowning out any consistent message. This is a future that isn’t worth saving, and a human race that isn’t even sure it wants or deserves saving.

Included in this trade are the nine side stories that accompanied each issue of the series, presented under a “Dark Knight Universe Presents” banner. Some of these interludes are essential to the overall narrative, but a few are completely redundant, and I can understand the frustration of readers who picked up the comics on a monthly basis. Comprised in trade paperback format, however, they flesh out the world quite satisfyingly, elaborating on the state of super heroics in Miller’s alternate future. Some are illustrated by Miller, in the same reviled style as Dark Knight Strikes Again, and his abstract proportions and confused layouts reinforce just what a good idea it was to get Azzarello and Kubert on board for the bulk of the story. I had low expectations for The Master Race, having avoided the series in comic form and seen many a derisive comment on social media, but I thoroughly enjoyed it. Miller and Azzarello do very little to develop the Batman character or mythology so firmly established in Returns (though Carrie Kelly comes into her own) but they clearly had so much fun writing this, and I had so much fun reading it, that it hardly mattered.

The one thing Master Race isn’t, I guess, is essential. If you want a book that’s going to rock the comic industry and redefine one of the most iconic super heroes ever created, this probably isn’t it. But that’s due to the development of the medium over the past twenty years more than it is the quality of the work by all involved here. Those talking heads media snippets, so innovative in Miller’s first instalment, are now a cliché, and Batman has endured ten thousand other reinterpretations, analyses and alternate universe counterparts. This was never going to top that classic from a far simpler and less oversaturated age.

If you approach Dark Knight III: The Master Race as nothing more than a slick and entertaining follow-up to the characters introduced in Dark Knight Returns, and many more besides, then you’re in for one hell of a ride. And no, you don’t have to read Strikes Back to fully appreciate it.

One thought on “The Dark Knight III: The Master Race Review”