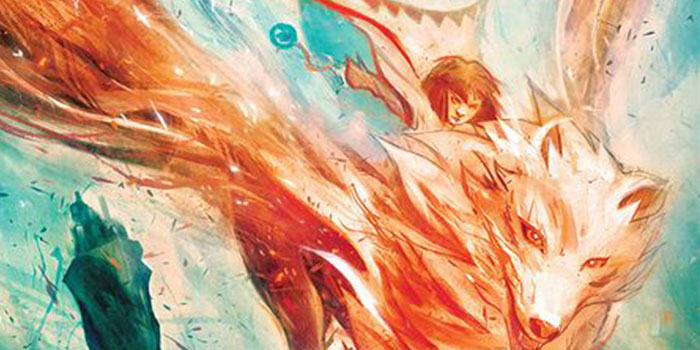 A luscious standalone hardback offering from Boom! Studios’ Archaia imprint, K.I. Zachopoulos and Vincenzo Balzano’s The Cloud is set in a fantastic world of disparate floating cities. A future enforced by sky pirates, in which the Great Before that once existed beneath the clouds is now inhabitable, and a young boy and his winged wolf Cloud are on a quest to find a long-forgotten artefact known only as “a wish” in order to set things right.

Vincenzo Balzano’s (Revenge: The Secret Origin of Emily Thorne) beautiful art has the confident digital brushstrokes of the finest concept art. On numerous occasions his work reminded me of such video games as Shadow of the Colossus, Ico, Brothers: A Tale of Two Sons and Journey; recent fantasy games that have placed a focus on fanciful and emotionally-drenched landscapes and left such storytelling conventions as names, characterisation and backstory to the player’s imagination. The Cloud is a comic and not a video game, yes I’m aware of that. Nevertheless, Zachopoulos and Balzano have cited Ico as an influence on the book, as well as Miyazaki’s works and The Neverending Story. Similarly, the story is at its best when its narrative is at its purest. Balzano’s art, full of furious reds and yellows and making brave use of empty space, encouraged the reader to fill in the blanks themselves. The Cloud is intricate in places and hazy and undefined in others; too abstract to be plausible yet always magnificent in its scope. It doesn’t matter why the boy (yes, that’s his name) soars the skies atop a winged wolf, all we need to know is that it is simply so.

As the story progresses, K.I. Zachopoulos (Misery City, Popgun) is intent on filling us in on his fantasy world at every step of the journey, and the various friends and enemies we encounter all elaborate further on the universe and its mysteries, frequently to a dizzying extent. But this occasional sense of exposition overload is easily forgiven when the book includes such inspired characters. A talking Easter Island head, a pod of flying dolphins, intelligent pachyderms and a Mad King dressed up as the moon are amongst the strange entities that guide the boy, his thieving lady friend and Cloud, the faithful wolfhound who narrates this tale.

Just when you think you know where The Cloud is heading, Zachopoulos’ phantasmagorical voyage plays towards an unexpected crescendo, ending on a note that is breathtakingly inspired.  Much like Archaia’s renowned Mouse Guard series, The Cloud is definitely recommend to fans of beautiful looking genre books and those rare fantasy comics that don’t tread the same tracks as Dungeons & Dragons, Lord of the Rings or Warcraft.