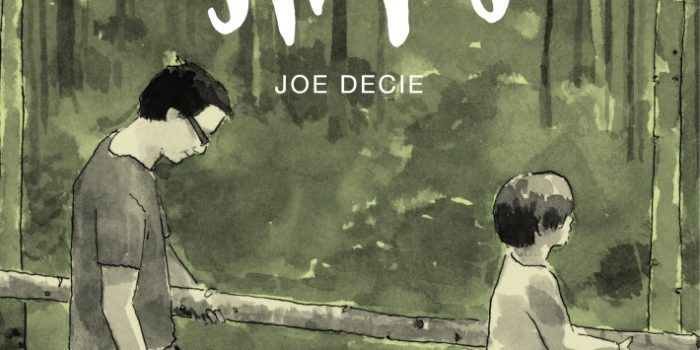 Recently, and very much against my own will, I made the transition from the rather horrifying state of being in my mid-thirties to the even more horrifying state of being in my mid-to-late-thirties. With this overnight evolution came unforeseen side-effects, including the need to incessantly worry about every small facet of everyday life and retell the same mundane anecdotes to people that, despite their utmost insistence, I’m convinced haven’t suffered them before. It’s almost as if, after years of rebelling against such a thing, my body has switched to a default “dad mode”. Which would be fine if I actually had kids…

If you’ve made it this far and are nodding in agreement, then it’s very likely that you’ll also love Joe Decie’s Collecting Sticks, a celebration of the undefined period before middle-age that’s equal parts blissful and melancholy, and entirely confusing. This beautifully realised tale of a family’s glamping holiday is also incredibly funny.

For the uninitiated, or indeed those with an aversion to hideous portmanteaus, glamping is the act of glamorous camping; all the inadequate amenities and miserable weather of British camping, but with the sharp edges filed down for the middle-aged and/or middle-classed.

As with Mike Leigh’s Nuts In May, Decie uses his family’s reluctant outdoors excursion to examine the trivialities of modern Western life. There’s something about the British countryside, even in its most sanitised form, that provides the ultimate challenge to urban folk accustomed to convenience; the sort of urban folk who’ll pay more for a cabin with limited facilities than they would a luxury hotel. Decie, whose previous book title The Accidental Salad should give you a succinct idea of his style, is spot on with his observations, particularly the central relationship between father and son. His characters, illustrated with a similarly gentle touch, are so plausible that, much like the best fictional creations, you immediately feel as though you’ve known them your entire life.

This small hardback packs in more Star Wars references than a Kevin Smith movie, but here they don’t feel like the sort of in-jokes or smug nods that blight so many modern comics. There’s a precious sense of authenticity to the relationship between the Star Wars-obsessed Sam and his father, whose mind is too preoccupied with every neuroses imaginable to still muster such passion (his fear of spiders alone is contradictory to the spirit of camping). The role of responsible guardian is therefore left to Steph, whose presence is smaller but just as brilliantly observed. She seemingly enjoys being both longsuffering partner and partner in crime.

Decie’s vignettes also hit a rhythm that flits between moments of contentment and bewilderment, his gentle humour too authentic to be entirely fictional (the book’s blurb reads “loosely based on actual events, but sometimes veering unexpectedly into fantasy”). From his reluctance to poop in a hole in the ground, to the family’s immense satisfaction in using an incomplete jigsaw puzzle as kindling, Decie rejoices in our inability to feel truly happy or fulfilled, without veering towards anything too didactic or profound.

Collecting Sticks had me grinning from the very first page to the last. Well, it was more an embarrassed smirk, evoked by that rare reading experience we all search for, when a specific book feels as though it was written specifically about you. Though I suspect that I’m not the only Western male to whom Collecting Sticks will feel uncomfortably familiar.

Collecting sticks is out now, published in the UK by Jonathan Cape.