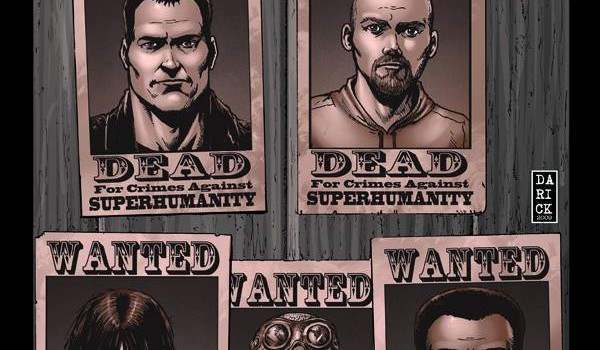 Garth Ennis dials the gross out meter up to 11 in Volume Five: Herogasm, in which we discover exactly what goes on in those superhero crossovers which have plagued comics for decades. In this case, Earth’s greatest heroes ostensibly depart for a war with the fictitious alien Maith’rai, while in reality the costumed community is gathering for a weeklong fuckfest. Sigh… Surprisingly, The Boys are watching from afar, waiting for an opportune moment to make a strike on Vic the Veep, America’s moronic Vice president and a man so inept that he needs help pulling on a “dicky hat”.

‘Herogasm’ was originally printed as a 6-part spin-off, but it’s by no means a superfluous adventure for The Boys. This is as much a part of the regular series as any other plotline, the repercussions of which will be felt throughout the main series for a long time. The art in this volume is by John McCrea, whose work is good but doesn’t quite depict Ennis’s gallery of grotesques nearly as effectively as Derick Robertson’s. Throughout the series Robertson has disappeared for an issue or two, and much like Steve Dillon’s occasional excursion on Preacher (or, rather, its own miniseries spin-offs), his absence is always felt. Volume 6: The Self Preservation Society, however, sees 2000AD legend and regular Ennis cohort regular Carlos Ezquerra share art duties with McCrea for a few issues, and he’s by far the best suited replacement for Robertson. In retaliation for Butcher’s actions at Herogasm, Vaught-American finally send a formidable foe The Boy’s way; Payback, a force second only to The Seven, who manage to mess our favourite yobs up to an extent that we’ve not yet seen. Nazi superman Stormfront not only makes for a great villain but his appearance leads into a cameo from the monstrously hung Love Sausage, whose apparatus I don’t ever want to have to look at again.

Derick Robertson then returns for a series of character origins. Mother’s Milk’s is tragic, The Frenchman’s is characteristically absurd, and The Female’s is utterly horrific. Ennis has such a gift for dialogue and character quirks that, Hughie aside, it’s easy to forget how little we knew about The Boys. Butcher’s back-story is the one I’m anticipating most, while the fact that the team’s mysterious founder Mallory has yet to make an appearance looms over this series like an imminent thunderstorm. Ennis has clearly been planning Mallory’s entrance from the series’ conception, and when he finally returns it’s likely to tear the lovable louts asunder. The Boys Volume 6: The Self Preservation Society

Click here for The Boys volume 7: The Innocents TPB Review.

Well, that’s that. I leave The Boys with mixed feelings; it’s a series that’s paradoxically overrated and far smarter than anyone seems to give it credit for. It’s also a far more affecting series than the fratboy humour might initially have you believe. While The Boys is not quite on the same level as Preacher it’s a completely different series, though the usual Garth Ennis trademarks are all present and correct; including the sense of comradely that has defined his best work.

No matter how far into the bottom of the barrel Ennis scoops, he’s wise enough to keep Wee Hughie a moral standpoint; Hughie may have been subjected to a world of superheroes, murder and sexual deviants, but he remains the same naïve Scot we met in Issue 1. And I think that’s kind of sweet.

Next up, either Lucifer, The Books of Magic or The Walking Dead. Decisions, decisions…