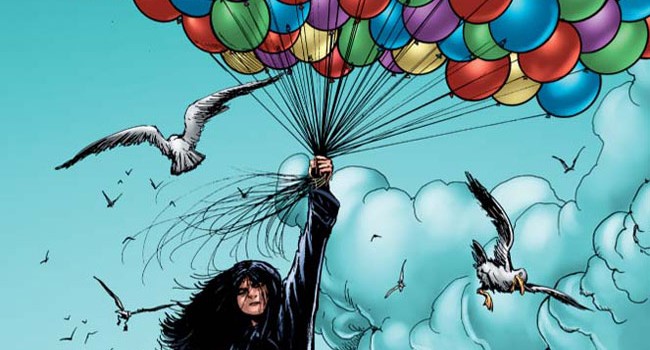 Seven volumes into The Boys and we’ve witnessed buggery, paedophilia, infanticide and more full-frontal nudity than you can furiously shake a rolled up Daily Mail at. Volume 7, ‘The Innocents’, is far lighter in tone than previous instalments, and while this trade lacks the clout (or indeed laughs) that the team’s encounter with the G-Men and ‘Herogasm’ provided, Ennis does get round to answering several of the questions that readers have likely been asking for some time.

The volume begins with Butcher spotting Hughie and Starlighter together, which causes him to question Hughie’s allegiance to the team. Thus, our Simon Pegg-alike is sent to spy on Super Duper, a team of useless super-teens that I’m assuming was inspired by family-friendly groups such as Power Pack, while Butcher digs for dirt.

Super Duper isn’t quite like any of the other super teams Hughie has previously encountered. Its members are decent people, for one, and despite their ineffectualness they genuinely uphold the superhero principles of their comic counterparts. Things go horribly wrong for the team, however, when reprimanded scumbag Malchemical is sent to tutor the youngsters; and much like the majority of characters in The Boys, he’s both a psychopath and a serial rapist. The Boys Volume 7: The Innocents

A secondary plot dishes out the repercussions on Rebecca/Starlighter’s suck-off with The Seven – including A-Train, the speedster responsible for killing Hughie’s former sweetheart. Hughie was bound to find out eventually, and while things currently don’t look especially optimistic for the only two redeemable main characters in this series, Garth Ennis has usually made sure that his purist characters remain so. One of the most touching fundamentals of the series has been the way in which Hughie has provided a moral anchor to the team, one that was previously absent, and Derick Robertson illustrates his betrayal magnificently.

The Homelander’s escalating frustrating leads to a chilling climax that not only accentuates the supers’ contempt for common folk, but looks certain to shift The Boys in a new direction. Throughout this series there’s always been the sense that the gang Hughie has sided with are no better than the costumed malcontents they hunt, but it’s becoming increasingly apparent that as brutal as Butcher’s tactics are, The Boys could very well be humanity’s only hope.