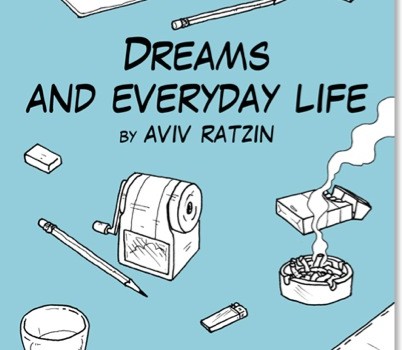 Stream of consciousness storytelling is a rarity in comics, perhaps due to the script-to-art creative process which has standardised the medium, or the somewhat depressing fact that most aspiring comic creators attempt to enter the mainstream by emulating it. Aviv Ratzin’s Dreams and Everyday Life is that exception to the rule; a collection of three interconnected stories, each of which is comprised of numerous anecdotes and instances told via Ratzin’s faceless avatar. There’s definitely a strong element of the autobiographical present here, though exactly what proportion of Ratzin’s rants, observations and philosophies are his own soon becomes obscured as the book takes numerous excursions, including a lengthy musing on the future of media. His droll takes on such familiar themes as creative block, illness (best line: “you’re having a bad case of cubism in your digestive system”) and our give/take relationship with technology feel genuinely fresh and entirely his own.

Dreams and Everyday Life’s peculiar narrative ricochets through time and space with a spontaneity that makes it impossible to guess where our top-hatted host will take things next. Ratzin throws his insecurity, ambitions and personal diatribes down in a deceptively chaotic fashion; just when we begin to dismiss the book as the random ramblings of a madman, he’ll returns to past characters and points with calculating wit. A trio of stickman frequently appear below the panels, commentating and bickering in tandem with Ratzin’s primary tale. I liked Dreams and Everyday Life a lot. While many indie comic creators seem content to trail the conventions set by their peers, Aviv Ratzin’s first graphic novel (also published in Hebrew, apparently) speaks its own unique language, and is strung together by some sophisticated scene transitions that mark the debut of a thoughtful writer and inventive illustrator.

For more on Dreams and Everyday Life visit http://www.tabella.co.uk/Dreams.html.

One thought on “Dreams and Everyday Life Review”