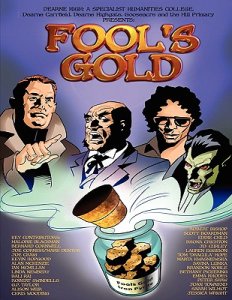 Any adult with an unremitting passion for comic books is going to remember the pain of having their comic-inspired illustrations rejected by their art teacher for being “immature”. Or worse still, the shame of being told that their book review for English Literature didn’t count, because, as we’ve been told perpetually since childhood, “graphic novels aren’t proper books”. Years later, we still bear the mental scars…

Encouragingly, Dearne High Specialist Humanities College in Rotherham have countered this media prejudice by combining the talents of dozens of students to produce Fool’s Gold. It’s an incredibly ambitious literary project through which Dearne High has encouraged it’s contributors to think beyond the boundaries of one particular medium, resulting in a fusion of comic book pages, prose, poetry and even raw script segments delivered as MSN Messenger exchanges, all combining to tell an equally enterprising story. Fool’s Gold’s multimedia narrative is an intriguing blend of the real and the imaginary, both a promotional tool and extensive creative collaboration, in which the students of Dearne High are themselves the stars. The book is being billed as a “virtual reality graphic novel” which is somewhat erroneous, but gives a good enough idea as to its metafictional nature.

Throw in a plot which explores the histories (factual and mythical) of Wakefield, Whitby and Scarborough after a group of Dearne High students are visited by the apparitions of three murdered boys, and you have a book that is never short on inspiration or passion. The visuals are equally eclectic; a combination of manipulated photographs, illustrated contributions, and several slick comic pages by former Marvel contributor Kevin Hopgood.

What’s most surprising about Fool’s Gold is how cohesive the overall storyline is. English teacher and project overseer Peter Shaw was able to involve such talent as GP Taylor, the writer of fantasy novel Shadowmancer, and former chief editor of 2000AD Alan McKenzie (whose book How to Draw and Sell Comic Strips, incidentally, should be any aspiring comic creator’s first stop), and it shows. Putting together such a project is no mean feat –mainstream publishers such as Marvel and DC often struggle under such lofty ambitions – and that this whopping 192 page volume exists at all is a credit to Mr Shaw and company.

Fool’s Gold is actually the second book by Dearne High, the first being Out of the Shadows: An Anthology of Fantasy Stories. I hope that it’s not the last such project from Dearne High, and that other schools are inspired to follow suit. As someone who has fought adamantly against genre and medium preconceptions, I genuinely believe that a generation of imaginative teenagers is being deterred from reading, and consequently writing, due to insipid and restrictive teaching.

How refreshing it is then that this remarkable enterprise has resulted in such a fun and rewarding book. Whether any of the pupils involved in Fool’s Gold will dedicated themselves to illustrating or writing novels, scripts or comics, only time can tell, but you’d be hard pressed to think of a better way to encourage them than seeing their fine work in print.

Fool’s Gold is published by Grosvenor House, and can be purchased from Amazon for just £8.99.