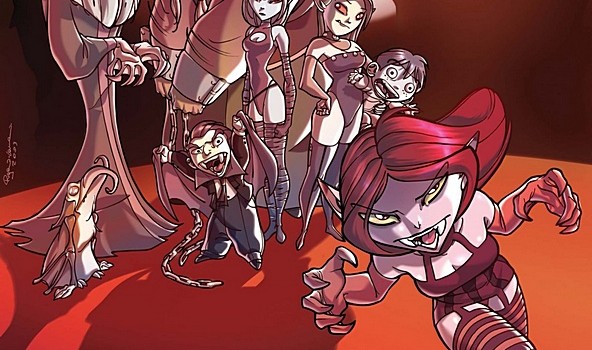 You only have to glance at the website for Soleil Productions (hey, come back!) to appreciate how many titles the French publisher currently has on offer. English speakers who’ve wanted to sample some Gallic comics that don’t feature Asterix will be happy to hear that Marvel are printing several of Soleil’s large catalogue throughout the year. And it’s easy to see why; Soleil’s books seem to have nailed the early teens market that favours mini manga volumes over Marvel’s spandex heavy output. Daffodil follows three secret agents of the Vampire Parliament (Daffodil, Globuline and Achilles), who are sent to the gothic citadel Addio-Colonnello to halt an assault from pintsized rebel Nosferatu and his minions. The vampire lords aren’t’ concerned for our wellbeing, however, but rather the fact that the fallen humans from Nosferatu’s indiscriminate attack will in turn become vampires, thusly causing a boom in the vampire population that no quantity of human blood will satisfy.

The problem with Daffodil is that it doesn’t quite know who it’s being marketed at, and the result reads like a cheery Saturday morning cartoon with tits and decapitations aplenty. The trio of vampire detectives have to be one of the most despicable group of protagonists I’ve ever come across in a comic book. You’ll supposedly jump for joy as they viciously murder dozens of undeserving city guards, disembowel a stray cat, callously push another sheltering vampire into the daylight and kidnap two children. But it’s okay; they’re pretty and wearing designer fetish gear, and are therefore both every male geek’s dreams, and exempt from all moral judgement.

Fortunately, the one glimmering gem in this proverbial pile is Giovanni Rigano’s art, which evokes the wide-eyed cuties of anime, the character designs of Don Bluth and the architecture of Disney’s Beauty and the Beast, all with that attention to detail common to non-British European comics. Daffodil’s page layouts are also quite brilliantly paced, and Paolo Lamanna’s colours are beautifully realised, with the dusk-drenched surroundings and moonlit tombs oozing atmosphere.

The wonderful art might win Daffodil a strong market in the West, but I found it to be an entirely vapid and questionable read. Obsessed with vampires? Like anime? Try Vampire Free Style instead. It has all the vampire genre ingredients that Daffodil offers, but with oodles of an ingredient sorely lacking here: charm.