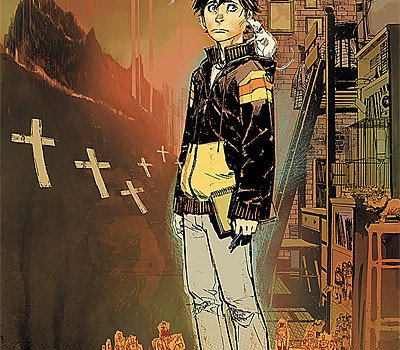 Joe the Barbarian is part of an increasingly popular genre; the adult kid’s book. Joe’s spacious attic bedroom is one that every adult wishes they lived in as a child (as opposed to every current child wishing they had), with 80s action figures lining the floor and a toy railway set dangling precariously from the ceiling. And like the majority of fictional teenage outcasts, Joe possesses proficient drawing skills. Of course, Joe the Barbarian is the latest effort from Grant Morrison, and it comes as no surprise when Joe’s reality begins to crumble around him, and the tiny toys in his room (including analogues of G.I. Joe’s Snake Eyes and the Transformers) come to life.

Quite why any of this happens, I’m not entirely sure. Issue 1 of Joe the Barbarian is little more than an exercise in character building, but it’s difficult to object to Morrison’s languid pacing when the story is introduced as well as this. The art by Sean Murthy and Dave Stewart really is in a league of its own, depicting Joe’s mundane life with a sense of the fantastical while making the hallucinatory sequences – though I suspect they’re much more – look almost plausible.

On the merits of the first issue alone, it’s difficult to say exactly where Morrison’s plot is heading, and whether Joe the Barbarian will be worth investing in. While Murthy’s art and Morrison’s track record would suggest yes to the latter, the setup between Joe and an equally timid female admirer is uncharacteristically clichéd for Morrison, and Joe’s problems (diabetes, workaholic mother, dead father) feel as though they’ve been lifted from an uninspired Hollywood kid flick.

While I have high hopes for Joe the Barbarian, I guess the question needs to be asked: were this leisurely paced premier issue scripted by an unknown writer, would it be so readily embraced?