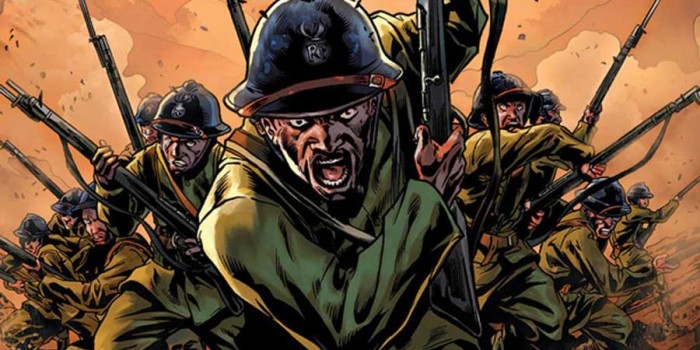 The story of World War I’s unsung all-minority unit may not seem the most fitting project for Max Brooks, best known for World War Z and similar genre works. But anyone who’s read that meticulously researched novel, inspired by Terkel’s The Good War: An Oral History of World War Two, probably won’t be in the least bit surprised to discover that the author is well-versed in military history.

An ambiguous concoction of fact and fiction brings to life the exploits of the 369th Infantry Regiment, later known by the Germans as the Harlem Hellfighters, the group of African American and African Puerto Rican troops who would ultimately spend 191 days in combat; more than any other US unit. When they weren’t dodging the Kaiser’s bullets they faced discrimination from their allies and racial violence from those whose liberty they were fighting to protect. 171 members of the 369th would be rewarded the French Croix de Guerre, only to return to an America whose attitudes remained unchanged.

This wasn’t the first or last time Black American soldiers would have to endure such treatment. In recent years, dramatisations of the Tuskegee Airmen (Red Tails) and the Buffalo Soldiers have permeated popular culture, yet the story of the 369th remains relatively unknown. Sony Pictures and Will Smith’s Overbrook Entertainment recently acquired the rights for a film adaptation of this fictional retelling, so for better or worse that’s due to change. At 236 pages, this must have been a colossal undertaking for Caanan White, and his black and white art is terrifically detailed and suitably visceral. Clearly, a great deal of effort went into depicting the Hellfighters’ journey from South Carolina to France’s rat-infested trenches as authentically as possible. White’s illustrations evoke the classic war comics of a bygone age, combined with a loose and unconventional approach to page composition.

The integration of fictional characters into real-life events, complete with cameos from such notable historical personalities as jazz pioneer Lt. James Reese Europe (also a member of the 369th), does occasionally lend the book a Forest Gump vibe. That’s not necessarily a bad thing, and while some have voiced issues with Brooks blurring the line between truth and myth, I did not find it off-putting or distasteful. If anything, the events and attitudes surrounding Brooks’ characters are far more fascinating than the characters themselves, most notably in a chilling scene involving D. W. Griffith’s Birth of a Nation.

Brooks apparently spent several decades researching the overlooked heroes, and it’s his and White’s devotion to the smallest detail that makes The Harlem Hellfighters a history lesson that’s as absorbing as it is educating.

The Harlem Hellfighters is published in the UK Pub by Duckworth Overlook, and will be released on 29th January 2015.

One thought on “The Harlem Hellfighters Graphic Novel Review”