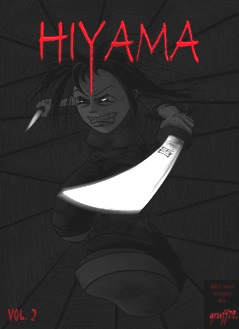 Written and illustrated by Gruff79

Hiyama’s depiction of 2019 London isn’t far removed from our present – which I found peculiar until I realised that England hasn’t changed drastically since 1999 – but with amplified levels of crime and an irrevocably corrupt police force willing to turn a blind eye. Tired of watching his superiors tolerate London’s criminal underworld, Officer John Torrent teams up with Chen Hiyama, a martial artist turned vigilante whose one-man crusade against crime soon becomes a family activity. The first volume of Hiyama sees Chen Hiyama’s crime-fighting legacy passed onto daughter Mei when his wife is senselessly murdered by a member of a London crime gang. In volume 2: Devils Within, set two years later, Mei once again takes to cleansing the streets of scum when her daughter Bee is kidnapped. I originally planned to review both volumes of Hiyama separately, but after reading both thought it fairer to combine the two. Devils Within is a far more accomplished effort, with superior visuals and an overall more cohesive structure.

Gruff79 is reportedly an ex-serviceman, a musician in the British Army, who began working on the first book in 2003, which gives you a pretty good idea of how much patience and perseverance is required for such a project. Gruff79 isn’t going to garner much praise for his art, which is crude at the best of times but still has a certain charm to it. Fortunately, his murky imagery and punk approach also take the edge off of Hiyama’s frequent and graphic violence.

While I didn’t have a problem with Hiyama’s level of violence, Mei and her father’s vigilante efforts have disturbingly little impact on their day to day lives. While Gruff does weave the effect that Mei’s “hobby” has on her daughter into the second volume, witnessing Chen merrily dispense quips as he slices up scumbags willy-nilly and jokes about the previous night’s activities to his family the following morning over breakfast is disconcerting to say the least. Even if his victims do deserve it.

Hiyama has been published in the smaller Manga format, and with its hyperkinetic bloodshed, Eastern influences and breezy pace, that’s clearly where the series’ market lies. While Devils Within is by far the better book, you’ll need to read the first volume of this proposed six-part odyssey to appreciate what Gruff79 presumably hopes to accomplish; a serial that begins simple and becomes increasingly involving with each instalment.