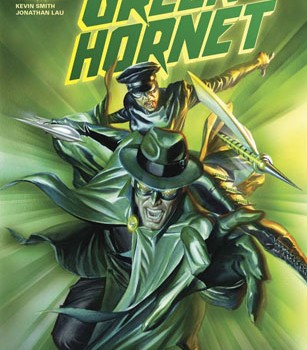 Seth Rogan’s unlikely adaptation of radio superhero the Green Hornet is scheduled for December this year, and Dynamite are definitely making the most of the licence, with a prequel series, a Kato spin-off, a futuristic take on the masked vigilante, and this miniseries based on Kevin Smith’s ill-fated project all hitting the shelves over the next few months. Given the hype that once surrounded Smith’s Hornet project, a series such as this is potentially a lose/lose situation for both fans of the Golden Age hero and the creators involved. If it’s terrible, then the hype and rumour we endured circa 2004 was for nothing; and if the series is fantastic, then comic readers can silently lament the great superhero movie that never was.

Anyway, foreboding aside, this is shaping up to be a solid enough series. But taking into account the book’s movie origins it’s also woefully predictable, commencing with a flashback that announces the jade vigilante’s retirement, and later introducing Britt Reid’s arrogant dickwad of a son, who’ll presumably inherit the mantle.

I’m surprised that the cover’s depiction of a female Kato has not caused more of a stir – but then, does the Green Hornet have that large or passionate a fan base? I feel that Dynamite might have a tough time convincing the comic community that the Hornet is a hero worth investing in; after all, this is a character best remembered for briefly having Bruce Lee as a sidekick.

Thankfully, Jonathan Lau’s assured pencils (from breakdowns by Phil Hester), and Ivan Nunes’ wonderful colour work ensure that this series is a feast for the eyes, if not the brain. Their lavish visuals just about make Green Hornet #1 a worthwhile purchase for those curious about the character or Smith’s script.