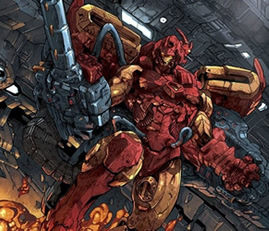 Alternate universes are more often than not an extraneous affair, short lived and ultimately imposing little change on the mainstream “realities” from whence they spawned. The House of M plot exemplifies this; of all of Marvel’s big events, it was perhaps the most pointless. Excluding a decrease in the mutant population, very little had changed once reality had been restored to the Marvel Universe. The Fantastic Four segment sees the Fearsome Four, a family team comprising of Victor Von Doom, wife Valeria (the Invincible Women) and son Kristoff (the Inhuman Torch) and Ben Grimm, the sole surviving member of Reed Richard’s excursion into space, strangely now called the It. Doom is no longer encased in steel, but constructed of it, with sorcery-based powers that bear more than a little resemblance to Terminator 2’s T1000.

Essentially Magneto’s personal hit squad, we are introduced to the Fearsome Four as they rid Subterranea of the Mole Man and his kind. Naturally, Doom is not content to play number two to Magneto, and begins plotting to overthrow the House of M. It’s one of the more interesting House of M mini-plots, with a satisfying conclusion that sees the tortured, intellectually crippled It have his day.

The Iron Man story is less successful, if not altogether bad. Unlike the Fearsome Four premise, House of M’s Tony Stark is not far removed from his mainstream counterpart. Tony is one of the few Sapiens (non-mutants) entrusted with any responsibility in this universe;  unfortunately his technology is used to restrain and control the diminishing Sapien populace. Naturally, in his spare time he gallivants about in his steel creation, righting the wrongs he’s helped established in his daytime persona. Pat Lee’s art is a mixed bag; his robots and exo-skeletons are exceptional, but his humans are eerily vacant looking, with eyes like porcelain dolls.

The House of M came and went, having little impact on the Marvel universe as a whole. This is one of the better books, if still totally unremarkable.