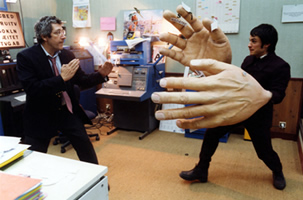 Young artist Stéphane (Bernal) is coaxed back to his childhood home in France, where after an accident with a piano he befriends neighbour and fellow creative soul Stéphanie (Gainsbourg). Initially attracted to Stéphanie’s friend Zoé (Emma de Caunes) Stéphane soon realises feelings for the plainer Stéphanie, but his inability to differentiate dream from reality complicates and jeopardises their bond.

After teaming with Charlie Kaufman for Eternal Sunshine of the Spotless Mind (and the best forgotten Human Nature) demented music video director Michel Gondry takes screenwriting duties for Science of Sleep, a Kaufman-esque tale of adolescent, confused love and dream-inflicted realities. It’s Eternal Sunshine, only more so; but we’d expect nothing less from a director famous for solving a Rubik’s Cube with his feet. Essentially an eclectic, multilingual, idea driven mix of special effects sequences, Science runs the risk of becoming an MTV montage – several of the dream sequences misfire, or become a tad tiresome – but Gondry’s vivacious hand keeps Stéphane’s spiralling detachment from reality from ever becoming boring. It’s definitely an acquired taste; the endless supply of ideas will delight some and inflict headaches on others.

The handmade special effects are the star of the show, possessing a “three toilet rolls and some tin foil” Blue Peter charm that outshines every indistinguishable CGI sequence that mainstream summer audiences will be more willing to endure. But that’s their loss. Cardboard cars clash with stop-motion creatures and swirling bluescreen backgrounds through multiple dreamscapes that seem to have been lifted straight from an autistic 8-year old’s randomised psyche.

Science is a difficult film to summarise, let alone rate. The cast of characters – most enjoyable of which is Alain Chabat’s sexually famished workmate, Guy – all come complete with the obligatory nuance or two, and though fun are all a little shallow. But the chemistry between Gael García Bernal (The Motorcycle Diaries) and Charlotte Gainsbourg’s (21 Grams) incompatible dreamers has a downtrodden sweetness about it that just about rescues it from Gondry’s irrepressible whim.

Science of Sleep is more an intimate, laboured oddity than Gondry’s magnum opus, but is still unique enough to ensure a cult fan base of… corporeally detached fantasists, presumably. Recommended to anyone whose most memorable romance was partly imagined.