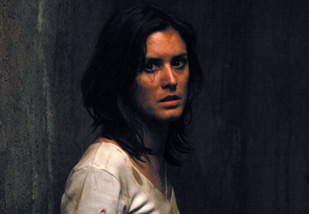 In a remote Budapest cottage, French couple Lucas and Clementine (Cohen, Bonamy) are traumatised by an unknown and indefinable force.

2003 saw a resurgence in the French horror scene with Haute Tension (Switchblade Romance here in the UK) a polished and adeptly suspenseful movie marred in its final minutes by an unforgivably forced twist-ending. Them is a similarly tense experience, which like Switchblade Romance fails to end in an entirely satisfying manner, but is nevertheless an accomplished and recommendable horror. With a commendable 74 minute running time, dual directors Moreau and Palud keep the film lean and focused with minimal dialogue or character development, and though the two leads are convincing they play second fiddle to the “Them” of the title. Clementine (the stunning Olivia Bonamy, Read My Lips) is strong but never heroic, her irrational actions entirely believable. The shaky-cam direction, nauseatingly overused/misused in recent mainstream cinema, captures both the desperation of our couple and the ferocity of their feral aggressors.

Without spoiling the plot, the film’s revelation is disturbing on a variety of levels, if ending in the same downbeat manner as the majority of modern slasher pics. The attackers’ motives left unexplained, Them’s endnote is chilling and surprisingly thought provoking, if somewhat separate in tone from the excellent setup.

Short and far from sweet, Them bleeds every drop of atmosphere from the remote location and its dense surroundings, but suffers from familiarity.