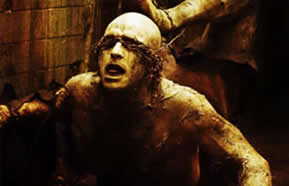 Generic American couple Rose and Christopher Da Silva (Mitchell, Bean) are concerned about their daughter Sharon’s (Holden) ceaseless sleepwalking. The possessed daughter frequently attempts to take her own life, while screaming the name of a small town named Silent Hill. Rather than taking Sharon to a psychiatrist, Rose decides to drag the poor child to the derelict town in search of answers.

Despite indomitable success in the digital world, the movie versions of Resident Evil, Tomb Raider and Mortal Kombat still induce looks of bewildered embarrassment from all but the teenage male demographic. A bloodied stake in the coffin of bad game adaptation, Silent Hill takes this sub par subgenre one brave step forward. Brotherhood of the Wolf director Christophe Gans, a self-confessed game junkie, has clearly worked to bring the best parts of Konami’s series to life. Unfortunately, he’s also brought the worst. Silent Hill takes great care to bring the games distinct style and unnerving atmosphere to the big screen, and in that it succeeds. Minus the interactive element, however, the film soon trips over its predecessor’s corpses by failing to implement a plot. Rose’s incessant running back and forth from location to location, level 1 to level 2, soon tires, and the film soon gets tangled in its own video game roots.

To praise the movie where due, Silent Hill, both town and film, looks absolutely stunning. Gans has an eye for both beauty and monstrosity, and the CGI-heavy scenes are handled with a keen eye. The moments in which Rose finds herself transported from the eerie, ash-coated ghost town of Silent Hill to the other Silent Hill – all hellish flames, barbed wire and faceless beasties – are the films highlights, both exhilarating and nauseating. The demonic creatures are disgusting and memorable, each a slight variation on a Hellraiser-with-extra-hooks theme. Simply put, Silent Hill looks bloody brilliant.

Radha Mitchell is no Sigourney Weaver, but is adequate as mother turned heroine Rose, if impaired by lacklustre characterisation. Sean Bean, as Roses husband, Christopher, is less fortunate. Cast after Hollywood execs demanded a male character be added to the script, his subplot feels redundant and unnecessary, distending the films lengthy 127mins running time.

It’s difficult not to appreciate Silent Hill on many levels, but equally hard to recommend it. It is the first commendable movie derived from the video game world, but like its characters, the film eventually loses his bearings. Though unsettling in (body)parts, Silent Hill also lacks genuine scares. Director Gans should take note; the uncertainty of an unlit alleyway is worth a dozen computer generated monstrosities.