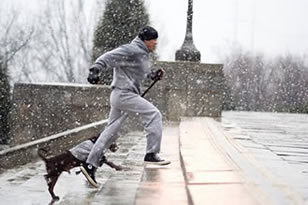 With Adrian succumbing to cancer four years ago, Rocky Balboa (Stallone) owns a small Italian restaurant in Philadelphia. When an ESPN broadcast depicts a computer simulation between an in-his-prime Balboa and current heavyweight Mason “The Line” Dixon (Tarver) with Balboa rising victorious, the aged bruiser realises an aching desire to fight one last time.

Nostalgia is a deceitful bitch, capable of making the most turgid, uninspired shows of yesterday reach classic status. Through its kaleidoscopic goggles The A-Team, Knight Rider and MacGuyer are almost watchable. Perhaps more than any other sequel-burdened franchise the Rocky films have hidden behind a rose tinted veil, feeding on our sporadically pleasant memories of the 70s and 80s. Stallone knows what we love about the lummox, and he’s smart enough to play on it. Spider Jerusalem? Little Marie? Adrian’s pet shop? Mickey’s Gym? If these mean nothing to you, then you’re unlikely to appreciate Rocky Balboa. The sixth instalment in the lovable lummox’s struggle against illiteracy is less a sequel than a revisiting of the series’ first instalment, a ‘where are they now?’ of Kensington, Philadelphia’s struggling inhabitants. By the miracle of retconning, Rocky has been cured of the brain damage killing him in the previous film, and feels much like he did in the original movie; an amiable moron.

Complimented by a script which ranges from cringe worthy to invigorating, it takes mere minutes for Stallone to convince us that we need more heroes like Rocky. For the first time since Rocky in 1976, Sly has something to prove. His features stretched and contorted by overzealous botoxing, he brings to the role an oomph that only a desperate man can, and reminds us that when given the right part, he can act.

Former light heavyweight champion Antonio Tarver is a sympathetic if unremarkable foe, with as much to fight for as Rocky. Burt Young reprises the role of Rocky’s surly buddy Paulie, and Tony Burton returns as Apollo’s ex-trainer Duke. Replacing Sage Stallone as Balboa Jr, Milo Ventimiglia seems a little out of place, an unsuccessful leftover from Rocky 5.

Rocky Balboa is not a great film. Like its pugilist, it’s a little decrepit and increasingly cumbersome, but somehow manages to get by on a big stupid heart. By the time the training montage kicks in to Bill Conti’s familiar score, it’s impossible not to be rooting for Rocky.