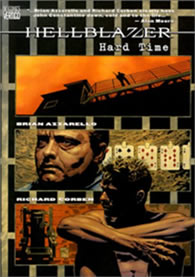 There comes a time in any good franchise when one of our favourite characters will find themselves behind bars. Brian Azzarello’s recent run on Daredevil has been exceptional, with Matt Murdock’s incarceration in particular adding a new dimension to the book’s main and supporting cast. In 2000 Azzarello did almost exactly the same thing with occultist John Constantine; fortunately the formula was a success both times. Hard Times’s major strength is that it begins with Constantine beginning his sentence; only during the story’s resolution are we told the why. Azzarello understands that Constantine has never been a protagonist of enduring depth, and revels in letting him talk and curse (quite literally) his way out of the most unpalatable predicaments. The maximum-security setting is a taut, synthetic hell, infested with the usual: rapists, gangsters, corrupt guards and every breed of ethnic minority stereotype (Italian mobsters, black brothers, white Nazis and Islamic extremists).

Underground artist Richard Corben’s art is peculiar to say the least, his warped caricatures often looking like dwarfed head-bobbers. In Constantine’s usual setting this would have jarred with the series’ dense noir ambience, but Corben’s grotesque style manages to capture the nightmarish surrealism of the claustrophobic surroundings. Tim Bradstreet’s covers are as always excellent, if a little indistinguishable.

Constantine has always reminded me of Sheriff Lucas Buck, the supernatural manipulator in American Gothic. Central but superficially inessential to the events around them, both characters control their environment without lifting a finger. Azzarello captures the prison dialogue perfectly, with Constantine dry wit keeping the featureless, familiar interior from ever becoming stale. He’s a likable rogue who’s only really good in comparison to the scum surrounding him.