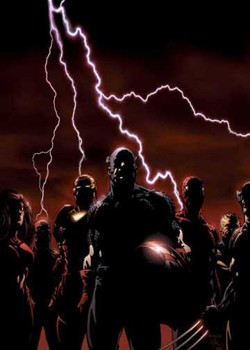 Ever since its announcement, I’ve resented the New Avengers line-up. You see, in my Avengers, Justice League and X-titles consuming heyday I was always interested in the little guys; the Blue Beetles, Booster Golds and Guy Gardners of the Marvel Universe if you will. If I wanted Captain America, Iron Man, Wolverine or Spider-man I’d buy their specific titles. The Avengers team was the only place I’d find characters like Hawkeye, Vision, Black Knight, Hercules and Falcon – properties not popular or substantial enough to merit their own books. Alongside the mandatory Iron Man and Captain America, our new team also consists of the ubiquitous Spider-man and Wolverine, token black guy Luke Cage (he’s coloured therefore vents attitude on every panel) and Spider-woman  (two Spideys?). With Thor currently sleeping the sleep of the gods, the Sentry is the only inclusion to the line-up with any real clout; he’s the closest the Marvel universe has to a Superman.

The exhilarating first half of Breakout sees just that; a security breach at maximum security prison the Raft courtesy of Electro, with a wide range of villain cameos – and in Carnage’s case, a swift exit. Within just two issues, Bendis has given us an introduction worthy of Hollywood’s finest and more importantly, a reason for a new Avengers.

The second act, which sees the team take on Sauron in the frankly ridiculous Savage Land – startlingly, superheroes, dinosaurs and Tarzan do not mix – is less successful. Though Bendis’ trademark wit manages to keep things afloat (Spider-man self-depreciative banter with macho Cage is hilarious) one can’t help but feel that by the end of Breakout, a sense of complacency has already kicked in.

Finches pencils and D’Armata’s colours give the book a big movie visual polish, with a vast ensemble of villains featured in the opening pages. With the Ultimate imprint as convoluted and inaccessible as the regular universe, Breakout stands as an ideal starting point for new readers. The title unashamedly endeavours to be the Marvel equivalent of the JLA, even if its roster doesn’t quite pack the same kapow.

After his work on Ultimate Spider-man and Daredevil, Bendis’ Avengers redux is hardly the revolution that fans might have hoped for; calling it “new” is a stretch. But those with a fancy for undemanding comic book action at its most conventional will come away more than satisfied.