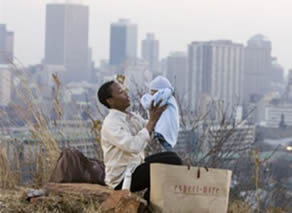 Murderous thug Tsotsi’s (Chweneyagae) life is thrown into introspection after he steals a car containing a three month-old baby.

The Soweto slums surrounding Johannesburg, South Africa are the backdrop for this urban fairy tale, based on the novel by Athol Fugard. Leading an inexperienced cast, Presley Chweneyagae plays Tsotsi (Tsotsitaal for thug) a callous street criminal whose life is turned upside down by the inadvertent theft of a baby whose mother he has shot. Chweneyagae’s portrayal is expertly subtle; his wide-eyed confusion speaks of his torment more than any number of words.

The infant plot device may smack of Big Daddy or Three Men And A Baby, but Tsotsi’s transformation is far from absolute. A confused sociopath, he does not become good as such, but rather loses his capacity to do bad. That Tsotsi’s real name, David, is only revealed in the second half is key to his long renounced innocence. Single mother Miriam (Terry Pheto) detects a glimmer of hope for David, despite his threats. Her simple life symbolises the sense of home that Tsotsi has longed for. The eclectic selection of Kwaito music lends weight to key scenes and an angst driven vibrancy to others. Hood’s vivid imagery occasionally gives the film a Western sheen which jars with the shanty town exteriors, but his landscape is equally diverse, from the cramped, infested slums to cold, barren nightscapes. A series of unnecessary flashbacks encumber an otherwise impeccable character study.

The DVD shows two alternate endings; in one a surrounded Tsotsi is shot dead reaching for the baby’s bottle, in another he escapes. Ultimately, Hood decided to leave his fate unresolved, a masterful decision that saves Tsotsi from the closure which flattens many similar tales. David’s passage is one of redemption; his outcome is irrelevant.

It may verge on Hollywood sentimentalism at times, but like its conflicted protagonist Tsotsi is smart, savage and intense. A haunting, poignant experience with a remarkable performance from Chweneyagae.