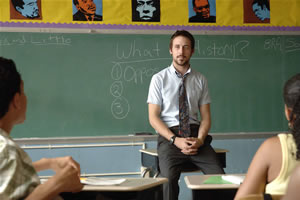 At first glance Half Nelson’s formulaic plot denotes a drug-addled Dead Poets Society, Dangerous Minds minus the guns. Even the stale Freedom Writers had a crispier premise. Yet Half Nelson defies convention, not with gimmickry or multiple genre synthesis, but a purist take on character development. Ryan Fleck directs with adamant restraint, treating his dual protagonists like intimate friends; this film has genuine heart and soul. If you demand high-drama, snappy, explicit dialogue and a cataclysmic conclusion, go elsewhere. Much has been made of Ryan Gosling’s performance, with 2006’s Oscar nomination ensuring the one time Young Hercules star a big future. Zoned in every scene, the pallid and malnourished Dan Dunne is a likable wretch, encumbered by a drug habit that is fundamental to his person. A pathetic individual, Dunne might be his class’s only hope.

Equally impressive is Shareeka Epps, as the kind of 13 year old usually found only in European cinema. Quiet and mature, with a smile that emphasises her imperfect teeth, she matches Gosling in every scene, their moments together creating an unprocessed tenderness that would feel out of place, disturbing even, in a lesser picture.

The other characters are not so refined, fitting neatly into “disapproving head teacher” “the ex that moved on” “workaholic mother” and “family man/dealer” archetypes, but this is really a two-man show. Half Nelson’s greatest strength is its subtlety; this is not a film about redemption, a lecture on the value of education or an understudy of the human spirit, but simply a story of two disparate individuals in need of friendship.

The deliciously indirect title refers to a wrestling move near impossible to escape, and while Half Nelson provides no happy ending, or an ending, it is far from downbeat, with a resolution that is truly uplifting. Were it deemed necessary to label the film with a slushy Hollywood tagline, “everyone needs a friend” might suffice, but Fleck has no need for such flagrant coquetry.

Unobtrusive but unforgettable, unassuming but deep. A+.