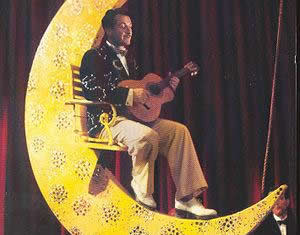 Woody Allen returns to the mocumentary format he perfected in Take the Money and Run, and stretched beyond use in Zelig, with Sweet and Lowdown, the ‘life story’ of Emmett Ray (Penn), an incompetent, tactless jazz guitarist now considered to be amongst the greatest in the world.

A light-hearted tale of self destruction, Sweet and Lowdown mixes fictional fact with fictitious fiction to present an inessential tale of an awkward enigma who could only speak clearly through his music. In parts a remake of Fellini’s La Strada, Allen mixes scenes from Emmett’s dismal life with talking head commentaries (including accounts by Allen himself) to deliberately disjointed effect. Hilarious at times, it’s by far Allen’s funniest film for over a decade, and far more than the opening suggests. Nominated for an Academy Award for his inimitable portrayal of the obnoxious and unsympathetic Emmett Ray, a gifted ignoramus who is vile but somehow affable, Sean Penn dominates the movie. Like Taxi Driver’s socially inept Travis Bickle, Emmett exists far outside the norm, taking his dates “to the dump to shoot some rats”, and is childlike in his egocentricity. Not unlike Woody, Penn is one of Hollywood’s few actors capable of assuming his roles while maintaining his own idiosyncrasies.

Also Oscar nominated, Samantha Morton, as mute Hattie, mimics La Strada star Giulietta Masina’s unnatural beam and compact movements to a tee but still makes the character her own. Modestly stunning, Hattie provides Emmett his silent muse, even if he does not appreciate it at the time. Uma Thurman’s pretentious writer, a staple of 70s Allen, feels a little out of place.

Providing alternate accounts of several accounts, any or none of which might be true, Lowdown is a celluloid manifestation of Woody’s neurotic rants, a masterfully rich piece hidden under the pretence of insecurity and apprehension. Like The Big Lebowski, it demands multiple viewing, displaying Woody’s trademark commentaries on life and music with a rose-tinted affection that made The Purple Rose of Cairo so captivating.

Sweet and Lowdown sits as Woody Allen’s best comedy and serious movie in many years, an illustrious, hugely quotable portrayal of a character so implausible he could easily exist.