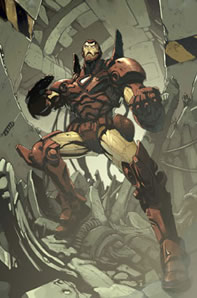 Though Marvel’s finest would soon reassemble under the New Avengers title, the ‘Disassembled’ plotline saw the team exit with more whimper than bang. This book sees Tony struggle with the loss of a loved one during and after the break-up. As ever with Stark, it’s a case of all business, no pleasure. ‘Prologue’ sees Iron Man inadvertently reanimating a creation of his father’s, Arsenal; a Cold War-era robotic precaution that would lay waste to New York were it likely to fall into Russian Hands. It’s the kind of plot we’ve seen countless times, and once again questions Tony’s technological superiority; if Stark Sr. is capable of building a superior machine to Stark’s suit some forty years prior, what makes the Iron Man armour more than a heavily tailored version of that which the Marvel military currently wear?

‘Singularity’ is a little more interesting, though it suffers from perhaps the most exhausted of all comic book clichés, the evil doppelganger. Yes, Iron Man has gone mad, and is killing business acquaintances and subordinates willy-nilly. Could this be the work of our Tony? Of course not.

Peculiarly, the two stories take place both before and after the event of Avengers Disassembled, lending the book an odd consistency; on which puts its inclusion in the Disassembled label merely superficial. Ant Man is present in the first and dead in the second, while Stark’s exit from the group is more politic-driven than choice.

Regardless of his behaviour during Civil War, Iron Man has always been a difficult superhero to like. In costume he’s an expressionless, walking tank; out of costume he’s an egotistic, womanising asshole. This book does little to change that.