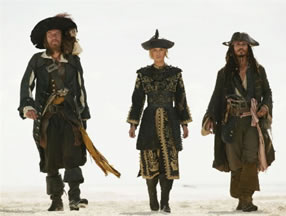 The Pirates trilogy’s middle instalment Dead Man’s Chest was a tedious, rambling continuation that lacked the original’s uncomplicated charm. Compared to At World’s End, however, 2 was elementary. Part 3 can only be described as bonkers. Darker, grittier, with some uncharacteristically graphic moments, the series’ convoluted conclusion makes no sense whatsoever. Pirates of the Caribbean: At World’s End

An initial half-hour devoid of Jack Sparrow only empathises the rapscallion’s necessity; aside from Rush’s deliciously hammy Barbossa (also previously deceased but back again) he’s the only character worth routing for. With Orlando Bloom’s bland Will Turner somewhat neglected, too much of At World’s End’s screen time is devoted to irksome tomboy Elizabeth Swann. Frozen features in a permanent pout, Pristine Keira Knightley looks like the product of a porcelain doll and a Supermarionation puppet, and has the acting skills to match.

Chow Yun Fat’s Chinese marauder Sao Feng and his exotic crew are interesting to look at, but the wreck of a plot makes little effort to justify their inclusion. Likewise Keith Richards, whose brief, pointless cameo as Jack’s father serves only as a tabloid magnet.

Despite the untidiness of its combined parts, At World’s End is not without its share of plunder. The effects are still unparalleled, with Davy Jones the most convincing CGI creation so far, and the little monkey is as endearing as ever. The action scenes are also terrific, with the series’ finale pitting every character introduced so far against each other, and the fate of Will Turner is the films best, perhaps only, surprise.

The conclusion is barely satisfying, if only because our lead ends up exactly where he started. We can but wonder why he bothered in the first place.