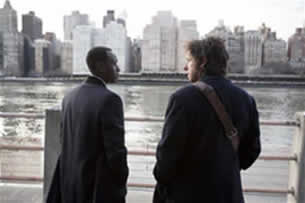 Happily married but isolated, dentist Alan Johnson (Cheadle) is suffering something of a mid-life crisis. But a chance encounter with former university roommate Charlie Fineman (Sandler), whose family were killed in the September 11th attacks, forces him to evaluate his own life. The 9/11 cash cow has been milked dry. We’ve panicked at ground level in World Trade Center, flown beside the ill-fated passengers of United 93, and died in the safety of our own homes in Right at your Door. Five years on, director/writer/bit part actor Mike Binder (The Upside of Anger) examines the aftermath, wisely eschewing politically pronged melodrama in this offbeat, bittersweet comedy.

Despite critically acclaimed turns in the commercially forsaken Punch Drunk Love and Spanglish, Adam Sandler still has everything to prove as a serious actor.  Millionaire bum Charlie is a difficult performance to place, sitting awkwardly between Punch Drunk’s tranquil Barry Egan and the knackered SNL angry man template. Immersed in the fantasy of video games and mp3s, Charlie indulges in the past to forget the present, emotionally repressed and prone to violent outbursts when buried memories are evoked. Through Binder’s wholehearted script, and the ever reliable Cheadle (evidently having a ball), it is impossible not to sympathise with Sandler’s amiable man-child. And yes, he does look like Bob Dylan.

Reign’s clement atmosphere is driven by Cheadle’s and Sandler’s on-screen chemistry, a friendships that rocks and rolls with Charlie’s transformations from placid geek to Falling Down sociopath, illuminating Reign’s darker moments with a milky, nostalgic haze.

The switch from indie curiosity to Hollywood fluff may leave audiences indifferent, but to dismiss Reign Over Me as Punch Drunk Lite would be unfair. Boisterous and touching, there is plenty to enjoy in this simplistic slice of feel good.