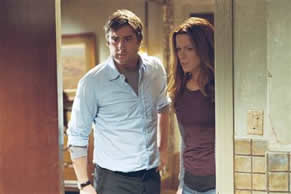 Bickering couple David and Amy Fox (Wilson, Beckinsale) spend the night in a rundown motel when their car breaks down in the middle of nowhere. Discovering a stash of horror movies, the couple soon realise that the cassettes are a collection of snuff movies, of which their murder will be the latest release. Screenwriter Mark L. Smith rests on the film’s prominent scene – which audiences will already be familiar with from the trailer – but soon loses interest, resorting to tedious genre clichés and a hurried, unsatisfying finale. It’s a real shame, as Antal keeps the tension infallibly high throughout, relying on traditional suspense (banging on the walls, screams from an off-screen monitor) rather than offal and red syrup.

Luke Wilson and Kate Beckinsale’s do an admirable job given the material, and their soon-to-be divorced couple develop once the terrible realisation of their predicament kicks in, with husband David relying on some surprisingly logical intuition. Sinister motel owner Frank Whaley (doing his best impersonation of William H. Macy impersonating Norman Bates) is intriguing, if not entirely menacing. Fortunately his motivations are left unexplained; there’s little of the hokum commentary Eli Roth insists on.

Limp ending aside, there’s little to let Vacancy down. From the ingeniously minimalist title sequence onward, it’s a short, taut, and distinctly old-fashioned thriller that ticks all the right boxes, but suffers from a lack of distinguishable moments.