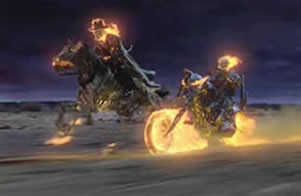 When young stunt motorcycle rider Johnny Blaze (Cage) gives his soul to Mephistopheles (Fonda) in exchange for his father’s recovery from cancer, he is cursed to serve as the devil’s hitman when need arises.

Mark Steven’s Johnson’s previous comic book movie, the flawed but agreeable Daredevil, benefited greatly from a director’s cut, shedding its love story elements in favour of a more methodical Murdock. Johnson’s follow up would never have been great – we’d have been lucky if it was good – but there was potential for a 90 minute joy ride. While Daredevil benefited greatly from an extended version, the Ghost Rider Extended Cut only further impedes the film’s sluggish pacing, adding an additional 15 minutes of flab to what should have been a short, fiery adrenaline shot. Johnson’s insistence on adding emotional depth to a character that has none only emphasises the character’s limitations, with the love story between a far too old Nicolas Cage and Eva Mendes’ Roxanne Simpson feeling tired and misplaced. The Ghost Rider himself is surprisingly convincing, but the spirit of vengeance lacks the humanity of the Hulk or the faster-than-the-eye agility of Spider-Man, and his brief screen time has little impact.

The entire cast feels miscast or superfluous. Sam Elliot fills the mentor role as the Caretaker, a pointless inclusion that fails to establish a Ghost Rider mythos as intended. Peter Fonda’s Mephistopheles suffers a woeful introduction, while Wes Bentley’s Blackheart is more albino emo than Satan’s son. Blackheart and his motley crew of fallen angels, a trio of trenchcoat rejects from The Matrix Reloaded each based on an element, are too similar to the villains in the Johnson scripted Elektra, and are equally dire.

Absolute faithfulness to the source material isn’t always the best solution with comic adaptations but Ghost Rider suffers from a multitude of perplexing alterations which only divest from Blaze’s Faustian predicament. Johnson is ever eager to profess his fanboy geekiness but, as he proved in earlier effort Daredevil, he doesn’t quite understand what makes the skeletal Hell’s Angel work.