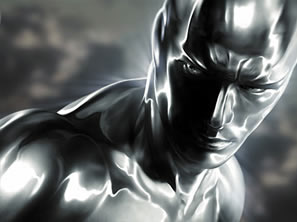 The marriage of Reed Richard (Gruffud) and Sue Storm (Alba) is postponed by the arrival of the Silver Surfer (Jones/Fishburne), intergalactic herald to the world devourer known as Galactus. To further complicate matters, the Surfer’s cosmic powers awaken old nemesis Victor von Doom.

Despite the unanimous forewarnings of critics worldwide, 2005’s Fantastic Four proved a commercial hit. Alongside the Spider-Man franchise, it was one of few comic book movies that did not sacrifice younger audiences for a darker, solemner take on its funny book origins. Unlike the Spider-Man movies, however, there was little to interest the over 10s. With Rise of the Silver Surfer, Tim Story delivers more of the same, with the added bonus of Lee/Kirby creation the Silver Surfer, a shy, metallic hippy who glides through space on a cosmic board. One of Marvel’s more philosophical characters, Surfer is the films sole saving grace, even if his agenda or powers are inconsistent and illogical, and Lawrence Fishburne’s voiceover is a little off.

The Silver Surfer is the film’s only consistent CGI spectacle, but the majority of his scenes are shared with Jessica Alba’s Sue Storm. Increasingly doll-like with every movie, Alba feels more animated than the computer generated Surfer himself.

Ioan Gruffud is as misplaced as he was in the first film; Reed Richard’s woeful stretch effects have also improved little in the last two years. Again, the Human Torch/Thing double act works well in small doses, while Julian McMahon manages to outdo his previous efforts to desecrate Victor von Doom beyond salvation. McMahon reduces the Marvel Universe’s finest criminal mind to a pantomimic scoundrel, sneering at the camera at every opportunity lest the audience forget he’s a villain.

Fans expecting a direct translation of the famous FF storyline will be also disappointed, with the planet consuming Galactus depicted as a sentient cloud, and a mindless power-swapping subplot stretched beyond even Reed’s capacities.

Still, compared to this year’s Spider-Man and Pirates of the Caribbean threquels, Rise of the Silver Surfer’s plot is refreshingly simple, and thankfully too short to outstay its welcome. Definitely a kids, rather than family, summer movie, it’s really hard to dislike, if lacking in any truly spectacular elements. The action sequences all move fast enough to conceal the dire effects as best as possible, though none are particularly memorable. A Stan Lee cameo which playfully winks through the fourth wall is one of several thoughtful touches.

More Saturday morning cartoon than comic adaptation, Fantastic Four Rise of the Silver Surfer is at least faithful to its source. Undemanding, brainless fun uninhibited by the darker, revenge-orientated themes of recent comic flicks, it’s a far more interesting film than its predecessor, if an only marginally better one.