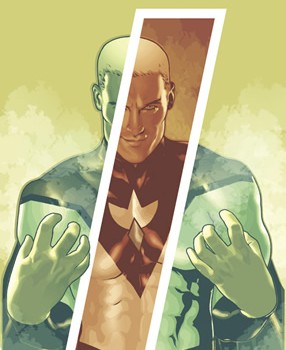 It can’t be easy being Superman. Sure, he gets the gratitude and respect of an entire nation, an attractive (if nauseating) girlfriend, the ability to leave planet Earth behind when he fancies a break… and X-ray vision is, simply put, every teen geek’s dream. Yet for all the perks his abilities offer, Supes never gets a day off. A volcano erupts in Japan, and the leaders of the Far East would wonder why Superman did nothing to help them. Hostages in a Metropolis bank robbery would stare eagerly at the sky and question why nobody was flying to their rescue. It’s enough to make a meta-human go insane – which is precisely what happens in Mark Waid’s tale of a hero gone bad. The Plutonian, once the caped epitome of all that is good and just, has turned completely barmy, flattening Sky City and hunting down his onetime colleagues in super-team The Paradigm one by one.

While not quite as original as the promotional material would have us believe, Waid’s series succeeds because of its presentation. The reasons for the Plutonian’s descent have yet to be revealed; each issue begins with a flashback in which a member of the Paradigm looks back to some possible cause or prevention that has only become apparent in hindsight.

Unlike Superman, the Plutonian has no known weaknesses; his team-mates and ex-girlfriend aren’t even sure if he’s earthborn or extra-terrestrial. In one of the most interesting plot strands, the Paradigm’s tech-genius Mr. Qubit has constructed robotic replicas of the Plutonian’s former arch-nemesis Modeus, in the hope that the droids will be able to locate the missing supervillain if they think like him.

Peter Krause’s art is occasionally inconsistent, but has an antiquated optimism about it that perfectly captures the contrast between the Golden Age and a present gone terribly wrong. In many ways Irredeemable is an extension of Waid’s Kingdom Come, as he drags several comic clichés into a more cynical time. In one memorable scene the Plutonian’s alter-ego, shy radio engineer Dan Hartigan, reveals his true self to his equivalent of Lois Lane, only for her to run in the next room, teary-eyed and betrayed, and inform everyone else. By readily accepting that his main characters are little more than thinly veiled analogues of these existing properties, Waid tears numerous comic book conventions apart in a manner that is at times playful, at others disturbing, but always gallantly astute.

Writing this review after reading the following (fifth) issue of Irredeemable, I’m not quite convinced that this series is quite the classic that others have claimed. From this collection of four issues, it’s not even up there with Waid’s best work. But while reading vol.1 I got that rare sensation of being led through a superhero epic by someone who knows what they’re doing, and has a clear idea of where this story is going. Which is pretty much all it takes to make Irredeemable one of the most promising series currently being produced.