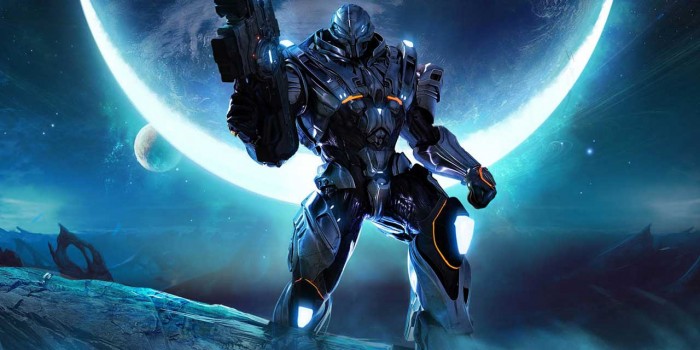 If you’ve been following Section 8 at all, and have either savoured the gameplay demos or marvelled at the Hollywood-calibre intro movie, then you’re probably going to want to experience four things as soon as you get your hands on the game: 1) Perform a “burn-in” skydive, 2) Run really, really fast, 3) Jump super-high, and 4. Run then jump. Just as Timeshift invited you to manipulate time and Dark Sector centred its action around the Krull-inspired Glaive, Section 8’s chief “gimmick” is that it places you in a high-tech power suit so darn spiffy that somewhere behind that MJOLNIR Mark IV helmet the Master Chief is turning green with envy.

Though Section 8’s setting and costume design are definitely reminiscent of the Halo trilogy, what distinguishes Southpeak Interactive and Timegate Studio’s first-person shooter from that revered franchise is that the power suits in question actually augment your characters abilities beyond the usual FPS conventions. In all fairness, apart from an impressive melee and a superhuman vertical leap, the Master Chief didn’t offer players anything that his human counterparts in other first-person shooters did. Timegate Studio, whose previous work includes the F.E.A.R. expansions, are attempting to build upon the style of shooter introduced in Tribes and Planetside, with Section 8’s fast-paced 32 player (with optional bots filling in the vacancies) deathmatch offerings.  Players join the fight of either the human defence force Section 8 or the ambiguous and mysterious Arm of Orion; though in all fairness the two factions are barely distinguishable but for a palette swap. The Beta we played had two large maps: the Utah Crash Site, with its prominent satellite dish, and the parched Orbital Relay.

The “burn-in”method of assault is perhaps the game’s most striking feature. After selecting one of six customizable load-outs (essentially customisable classes) players affix themselves to one of six squads (each of a maximum five troopers) and opt to either spawn with that squad or free spawn. The term “spawn” might be a tad misleading, however, as your avatar doesn’t so much materialize on the map as plummet earthward from an orbiting drop ship. Choosing exactly where you land is naturally key to aiding your team to victory, though gun turrets can be erected around captured bases to perturb unwanted visitors from simply dropping in unannounced. At around 1000 feet you have the opportunity to hit the air-brakes and slightly alter your drop spot; this proves especially handy when you decide to burn–in to a friendly base only to discover that the opposition have taken over.

And Section 8’s maps are big; not quite on a Battlefield scale, but not far off. Fortunately, your infantry have a nifty way of getting around; running for more than a few seconds will result in your character entering Overdrive, receiving a massive speed boost at the cost of targeting capability. Overdrive also prompts a slick camera shift into a third-person perspective, allowing you to appreciate your avatar’s metal rear in all its shimmering detail. Secondly, your troops also have jet-enhanced jumping abilities, permitting them to leap high walls and hover briefly. Combining both abilities can result in some pretty exhilarating feats. The earlier comparison to the Battlefield series definitely rings true of Section 8’s team-based objectives. Battles start out relatively straightforward, with points rewarded for captured bases and enemy kills. But this soon becomes far more complicated when objectives are gradually dotted about the map. In the Beta these rarely got more innovative than escorting a V.I.P. or convoy to safety and capturing enemy intel – or, conversely, assassinating said V.I.P. and defending the intelligence, depending on your faction.

The game is awarded a further level of depth when you access the dropship menu. Here, the six load-out types (Assault, Engineer, Infiltrator, Recon, Guardian, Artillery) can be completely customised, from the weapons they burn-in with to secondary gadgets that range from the fundamental knives and grenades to sensor blockers and repair kits. Further still, there are the passive modules to consider; these amplify attributes such as weapon damage, running speed and shield/armour strength.

Along with XP that upgrades your rank and weapon efficiency à la Call of Duty, certain feats also earn you dollars, which can be exchanged for items such as mini-gun turrets or the heavy armour – many of the available deployables and vehicles were locked for the Beta, but there will be many more. These are delivered by aircraft some ten seconds after being ordered, giving you a further incentive to stay alive. The highlight of these, and perhaps the Beta itself, is the aforementioned heavy armour mech suit. But as powerful as this walking tank is, as is always the way with this variety of techno-bling you’ll suddenly find yourself a popular target for resentful opponents.

Despite Section 8’s galvanised brand of deathmatch, there were a few issues within the Multiplayer Beta that will hopefully be addressed by the game’s release date. Several of the weapons, most notably the shotgun and sniper rifle, sound hollow and feel almost indefinably unsatisfying. The character models are all rather similar, and as a result of load-in customisation it is near impossible to visually gauge your enemies, often making confrontations a random and strategy-deficit affair. The PC version definitely plays more like a console game than it perhaps should, with the lock-on ability and power-based combat actually playing more comfortably with a gamepad – and it’s not often I’d say that about a PC FPS.

However, two frequent criticisms Section 8 appears to have garnered from other critics is that its graphics are substandard, and the multiplayer is confusing. Neither of which I agree with. Visually, the game is competent rather than astounding, but given the large playing fields one would expect less detail than, say, the more claustrophobic Gears of War. The game also runs effortlessly on my once-great-but-becoming-increasingly-average spec PC. As for accessibility; as someone who has only briefly dabbled in the Battlefield series, Tribes or Planeside, I had no major problems getting to grips with the game’s burn-in mechanic or multiple objectives.

If this small portion of Section 8’s multiplayer offerings is anything to go by, then Timegate’s innovative shooter could very well carve out an online niche for itself. Just a few hours of time spent with the game has been enough to shake off my initial Halo or Tribes comparisons. As with most first-person shooters, the multiplayer is only half the package, and I’m looking forward to what Section 8 will offer in terms of story; as enthralling as Section 8’s competitive aspect is, the game needs a sturdy narrative-driven single-player mode to place these battles into context. But more than ever, I anticipate slipping behind the reticule of Alex Corde this September, and discovering exactly who the Arm of Orion are.