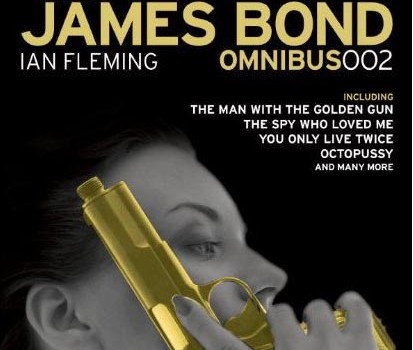 This second volume of comic strip adventures for Ian Fleming’s perennial secret agent contains another seven collected exploits, in an affordable omnibus compilation of Titan’s previous hardback trades. Yes, this is essentially a collection of collections.

While the grade A stuff may have already been exhausted in volume 001 (Casino Royale, Goldfinger) this volume is comprised of such recognisable classics as The Man with the Golden Gun, You Only Live Twice and Octopussy. Of particular interest to illiterate Bond fans will be ‘The Hildebrand Rarity,’ the only plotline from this collection not to have made it as a cinematic offering – though elements of that story were grafted into Licence to Kill. These strips ran throughout the 60s, with several proceeding Sean Connery’s debut in Dr No – though from the similar character design you wouldn’t have guessed it – and provide a fun rendering of such novels as The Spy Who Loved Me in an era when James was in his prime, and the series had not yet descended into the camp self-parody of Roger Moore.

These strips in sequence prove an arduous read; the format renders all attempts at drama or suspense futile, and the real thrill of Bond – the car chases, the ski chases, the, um, on-foot chases – is lost when condensed down to three panels-per-day. So what makes the serials of interest to Bond fans? John McLusky and Yaroslav Horak are both excellent artists, and their illustrations expertly evoke the fashions, flavours and automobiles of the Connery era. Horak’s art in particular is a delight, the epitome of pulp and steeped in noir stylings.

An unintentionally amusing disclaimer reads: “This book is a work of fiction. Characters may have views and use language which some of today’s readers may find offensive.” And therein lies the charm of these omnibuses from Titan Books; they showcase Bond in all his misogynistic wonder; as a soulless, unprincipled bastard who’s ostensibly out for number one however high the stakes.

For those fond of Fleming’s novels but apathetic to Hollywood’s steady neutering of 007, ‘Omnibus 002’ contains precious relics of a bygone age.