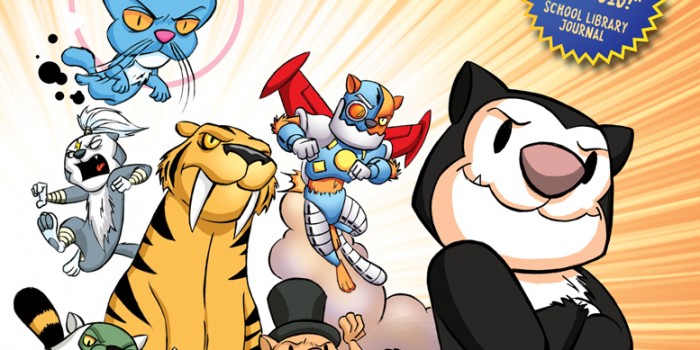 Press Release: Ape Entertainment is thrilled to congratulate Rob M. Worley, Jason T. Kruse and the entire creative team of Scratch9 on the just announced nomination in the category of “Best Publication for Kids”, in the 2011 Will Eisner Comic Industry Awards.

“When we created our all-ages imprint, KiZoic, we knew that Scratch9 was going to be an important part of the launch,” said David Hedgecock, CEO of Ape “but to see the book and its creators honored in this way is something that, while I truly felt was deserved, I dared not to dream.” Scratch9 is a four-issue comic series featuring a rascally house cat who gains the ability to summon any of his nine lives to help him out in his adventures. It was published between September 2010 and January 2011, and greeted with acclaim from such varied sources as Publisher’s Weekly, School Library Journal, Comic Book Resources and I Love Cats magazine.

“I thought I couldn’t be more proud of our little cat comic,” said Worley, the comic’s creator and writer. “But this is such an amazing and unexpected honor. I’m extremely grateful to the Eisner folks for the recognition.”

The Eisner nomination is the first for Ape Entertainment, Worley and Kruse.

“It is such an honor to receive an Eisner nomination for such a well deserving comic created for kids,” said Brent Erwin, COO Ape Entertainment. “This nomination just strengthens our commitment and belief in all that our KiZoic imprint and young reader comics can achieve.”

The trade paperback collecting all four issues of Scratch9 arrives in comic shops this month. Visit http://www.scratch9.com for more information about the book.

Founded in 2003, Ape Entertainment is the brainchild of lifelong comic book devotees David Hedgecock, and Brent E Erwin. Home to such popular titles as GO-GO GORILLA AND THE JUNGLE CREW, WHITE PICKET FENCES, and RICHIE RICH, it is also the North American publisher for DreamWorks Animation licensed properties including KUNG FU PANDA and THE PENGUINS OF MADAGASCAR.