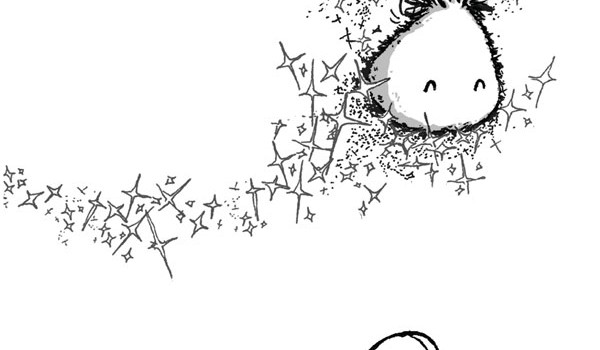 Amity Blamity follows mute four year-old Gretchen and Chester, a potbellied pig whose ability to talk seems to have earned him a place in Gretchen’s grandmother’s home, rather than hanging from and abattoir hook. Their serene, Pooh-esque playtime is frequently disrupted by Winston, a paranoid gerbil riding a shopping trolley, and the unending get-rich-quick schemes of Uncle Downey; a feckless loafer whose aspiration to succeed as a moonshiner is only hampered by his inability to abstain from enjoying his own product. And mighty fine product it must be, too, having attracted the attention of wee extraterrestrial meddlers, who have the power to turn Downey’s homebrew into… that would be telling. Billed as a graphic novel for “children of all ages”, Mike White’s Amity Blamity started life as online comic Pigtails and Potbellies, and has been de-colourised in its transition from digital to paper. But the shift to monochromic hasn’t neutered the passion that is evident on every page, many of which are crammed with background gags and humorous “footnotes”, and White’s gift for comically contorted facial expressions carries the increasingly nonsensical plot throughout. Amity often flows like a collection of newspaper strips, which, at 160 pages, makes this a book best read in small, frequent bursts.

Amity Blamity is charming, juvenile fun; there’s no allegory or satire to be found here (nor would I expect there to be). White is plainly pitching for a younger audience, and while I feel that Downey’s proclivities fall into areas that only an older reader will appreciate, Amity will prove a laugh-out-loud experience for  younger readers . And, of course, older, balder, fatter kids with a love for such timeless cartoon strips as Garfield and Andy Capp.

Amity Blamity is available now. Be Sure to check out Mike White’s blog for more info, not to mention some great papercraft figures of Chester, Gretchen and Downey.