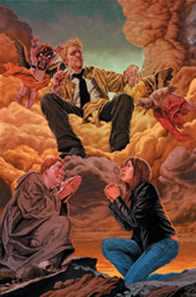 Of Vertigo’s prestigious catalogue, Hellblazer has always remained the most accessible title. John Constantine’s popularity can be contributed to the character’s strict adhesion to the noir genre. A paranormal Philip Marlowe, Constantine is an empty vessel with little in the way of back-story or supporting crew, an everyman whom any writer can mould their particular story to. That was, until I’d read Denise Mina’s Empathy is the Enemy and Red Right Hand, which together have made me feel like a first-time comic reader wading through DC’s Infinite Crisis. My head is on fire, my brain reeling like I’m trapped within an endless time-loop with only a single episode of Ghost Whisperer to keep me company. Mina’s 13-issue Hellblazer arc, collected in two separate volumes, has confused me in a way not experienced since my first glimpse of Dragonball Z at the age of 22. Peculiarly though, I somehow managed to enjoy myself. The books, that is, not Dragonball Z – though I did learn to love that bomb too, in time.

Unfolding like a supernatural detective novel, the plot synopsis is best left brief to avoid spoilers. Constantine is located by a man named Chris Cole, who claims to have been cursed by a pretty girl at a party, in an arcane arrangement which has led to the death of numerous people around him. Reluctantly – but isn’t that always the way? – our trenchcoated chain-smoker agrees to help Cole and, pursued by Praexis demons, travels with him to locate cult leader Steve Evans. That unlikely breed of villain who means well despite his evils, Evan plans to activate the Empathy Engine, an ancient device which will force Glasgow’s decadent population to share the pain of those around them, with the hope that they’ll become that little bit nicer to each other. Needless to say, it soon goes a bit pear-shaped.

To her credit, ‘Tartan Noir’ author Mina (the Paddy Meehan novels) still manages to make her confusing plot immensely readable. The supporting cast are all excellent, and develop well over the story. Mina’s strength is her dialogue; Glasgow’s inhabitants all have genuine Scottish piquancy. Constantine’s bleak, sardonic wit has arguably never been written better. It’s a shame that the story falls into dire convolution halfway, and is resolved by an unsatisfying deus ex machina solution. On several occasions I backtracked in search of answers, to no avail.

Leonardo Manco’s art is suitably grimy, and is compliment to perfection by Loughridge’s subtle colours. The inking is a little heavy at times, but the detail Manco puts into Glasgow’s historical locations and monuments is incredible.

One major gripe, with the publisher rather than writer and artists, is the lack of a title or numerical indication to connect the two books. As I mentioned earlier, Hellblazer has always been an accessible serial, which can be read in more or less any order. By neglecting to mention that Red Right Hand is essentially a Book 2, DC will only further alienate new readers.