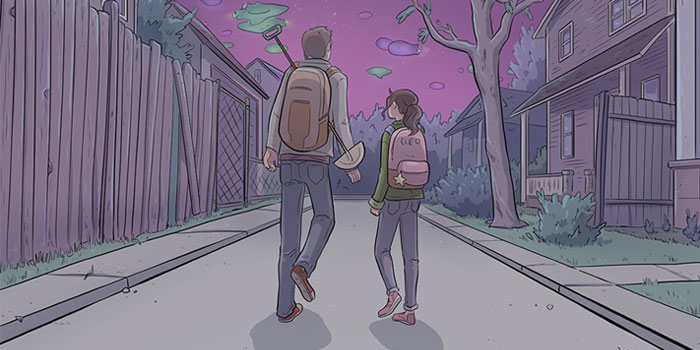 When shape-shifting aliens invade planet Earth, eleven year-old Cleo doesn’t just need to survive, she needs a father figure. The original one died during the initial assault, see, but Cleo’s predicament finds salvation in an unlikely form when one of the faceless extraterrestrials takes her father’s appearance, seemingly acquiring his personality in the process, and helps her rebel against his own kind.

Lifeformed: Cleo Makes Contact is an engaging all-ages book from writer Matt Mair Lowery and artist Cassie Anderson (of www.ordinary-princess.com), one that manages to straddle several different genres to great effect. The first chapter goes to some length to establish the two central characters and their sense of normality, lending extra clout to that inciting death. Despite the seemingly grim premise, however, Cleo’s buoyant disposition and Anderson’s bold and amiable art make for an unusually optimistic take on the post-apocalyptic alien invasion tale. Cleo and her alien guardian’s journey, both physically and emotionally, bears numerous similarities to Naughty Dog’s The Last of Us, predominantly in its surrogate father/daughter relationship, Anderson’s rendering of a newly abandoned world and… er, Cleo’s green military jacket. As with that fine game, it’s the central father-daughter relationship that Lowery and Anderson are clearly invested in more than the cataclysmic events that surround them, and Lifeformed works all the better for it.

The book also offers an authentic depiction of a teenage girl, or at least so it seemed to this thirty-something scribe – I’ve never been an eleven year-old girl myself, outside of that one adventurous weekend in Brighton. Cleo isn’t pigeonholed into one particular archetype; she’s vulnerable, courageous, terrified, capable of defending herself and in need of a protector from one page to the next. Unlike the young female protagonists of many similar all-ages comics, Cleo doesn’t feel designed purely to be a role model or icon, and that makes her journey all the more interesting.

The alien’s origins as a slave and non-complicit soldier are also revealed in flashbacks, and as the story progress it becomes as much his as Cleo’s. Lifeformed: Cleo Makes Contact is an odd book, then, in that it’s one that’s difficult to label, but there’s a level of naturalness and attention to character in Lowery and Anderson’s work that is severely lacking in so many other young adult sci-fi titles. Lowery’s script trades scope for intimacy, not only going to great detail to establish Cleo’s relationship with her father but referring back to it throughout the often leisurely adventure. I especially appreciated the chapter dividers, marked by Cleo’s rucksack and its decorative mementos and trinkets that with each repetition are replaced by survival tools and weaponry. These small touches make all the difference.

Lifeformed: Cleo Makes Contact is out now, and you can visit www.lifeformedcomic.com for more details.