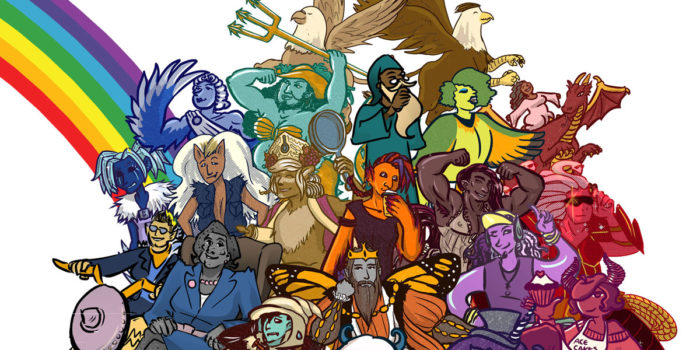 Denizens include Sir Fabulous the Third the Bisexual Unicorn, Madame Lucie Decline the Asexual Succubus, Captain Sashay the Genderqueer Merperson, and Hank and Gary, a heteroflexible hippogriff and gay griffin. Minority Monsters revels in its concept, with a sing-along theme tune, a handy index of both beasts and topics at the rear, and even Tolkieneque maps for those who find themselves lost in Transland or the Desert of Sexual Desire.

This is a silly book, sure, but there’s a sincere point behind it. Kimpton uses each mythical beast’s comic segment to dissect a distinct sexual orientation or preference, followed by Fred Aura’s notes that challenge the real-world myths surrounding bisexuality, polygamy and so on. Minority Monsters is yet another LGBTQ+ comic which finds that magical sweet spot between being informative and tongue in cheek. Even everyman Fred’s journey ends on a profoundly sweet and affecting note. Minority Monsters can be purchased in hardback from DiscordComics.com or downloaded from itch.io, though due to popular demand Tab is currently crowdfunding a smaller paperback version of the book on Kickstarter. Either format is recommendable. It’s a slight book, as much an adult take on a children’s book (with elements of an edutainment show) as it is a comic, and makes for perfect coffee table bait, left in plain view for unsuspecting readers. Whether Minority Monsters will enlighten your hypothetical guests I cannot say, though Kimpton’s good will and warm humour will certainly raise a smile.