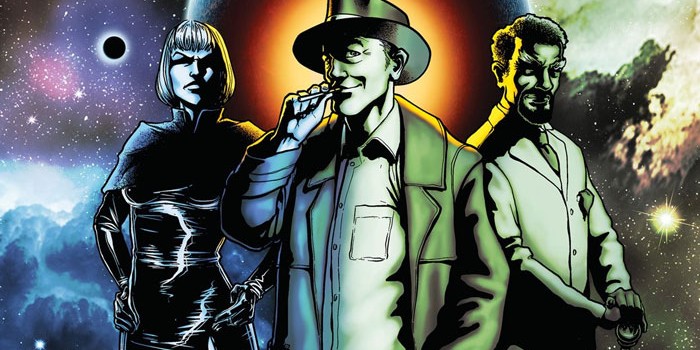 Irreverent, witty and a joy to read, Daniel Whiston’s Neroy Sphinx feels like the classic 2000AD saga that never was.

The titular Neroy Sphinx is an amalgam of anachronisms. Depending on which point of his timeline you visit, he’s either a self-serving entrepreneur who embodies the misogynistic fantasy of James Bond, an effortlessly cool chancer who’ll resort to all manner of treachery to stay alive, or the sleazy barfly in the background of a cheap space opera.

Sphinx’s only consistency is that he’s a self-serving asshole, but Whiston’s saga, mostly published in strips across several years of FutureQuake and printed here in chronological order, forever plays with our expectations of both Sphinx’s character and predicament. Just when you think you know him, he’s still full of surprises. Whiston is joined by such capable artists as Johnny McMonagle, James Kircough and Dave Thomson, but the series’ main appeal is its playful unpredictability. You never know what to expect next; the segments are around 6 pages long but every time you’ll be guessing just how Sphinx will evade certain death until the very last panel.

Each story begins with a quote from Andromedous Harks’ Neroy Sphinx: Man and Myth, lending the man himself’s adventures a far more epic quality than they’d have otherwise, as if we’re revisiting the early exploits of someone destined for greater things. There’s something so enthralling about following a character who ages as the series progresses that it’s a tragedy so few comic creators are brave enough to do the same.

But most of all, Neroy Sphinx is fun, in a way modern comics often forget to be. So if you find yourself yearning for the flippant sci-fi of classic Sam Slade and Strontium Dog, then Sphinx is your man.

You can order the first volume in the Eagle Awards-nominated series for a mere £5.00 plus postage at www.futurequake.co.uk.