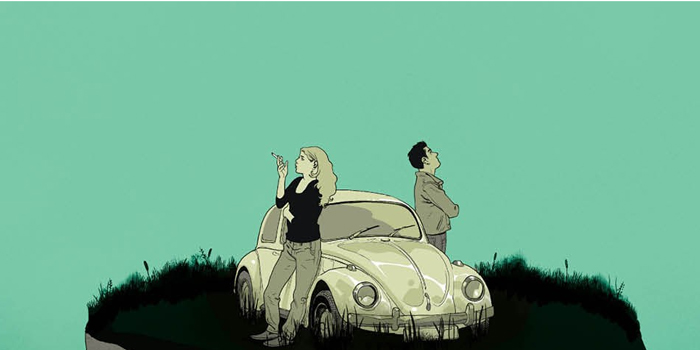 I read Pizzeria Kamikaze under the belief that it was a new release; the press release certainly gave that impression. But no, this metaphysical love story from Israeli creators Etgar Keret and Asaf Hanuka was first published in instalments in 2006. It’s also based on Keret’s popular 2001 short story Kneller’s Happy Campers, which was itself loosely adapted by Goran Dukić into the 2006 movie Wristcutters: A Love Story.

But hey, if I ain’t read it then it’s new to me. Pizzeria Kamikaze is now getting a much-deserved hardback rerelease from Archaia, with Asaf Hanuka providing a luscious new cover and Dan Jackson reworking his art into colour. It’s easy to see why Kamakaze’s original conceit captured the imagination, particularly for its opening scenes, in which we see a man named Mordy buried from his perspective, only to discover that he now persists in an afterlife reserved solely for those who’ve ended their own lives. Mordy is provided a home (from whom we never discover) and a job at the titular pizzeria, and continues an aimless existence in a world that bears similarities to his previous Tel Aviv confines. However, his thoughts are still consumed by Desirée, the ex-girlfriend who inspired him to take his life. It’s only when he bumps into another friend from the pre-afterlife, and discovers that Desirée is still alive, that Mordy is motivated to leave his job and embark on a road journey across a desolate countryside that gets stranger by the mile.

One particularly nice touch in Keret’s purgatory is the concept of “Juliets” – those who killed themselves with poison or similar methods that have left them physically (if not mentally) unscarred. Understandably, such folk are considered more sexually desirable than those who made a messy exit, such as Mordy’s newfound buddy Uzi, whose method of suicide is permanently marked by his namesake’s bullet holes in each temple. Uzi, much like Mondy and everyone else in this underworld of life takers, lives a narcissistic and largely vacuous life. Etgar Keret (The Seven Good Years) is one of those gifted comic writers who is able to say a lot with very little, and while his minimalist approach to storytelling may irk some readers, especially those expecting a full resolution, Pizzeria Kamikaze works because it keeps the minutiae of Mordy’s afterlife to itself. The Eisner Award-winning Asaf Hanuka (The Realist) renders Keret’s story with an understated hand, and Jackson’s colours are so striking that I cannot image the book in its original monochrome format. Hanuka’s afterlife is grimy and grounded in reality, but background details such as the semi-decapitated barflies at Mordy’s favourite haunt, Stiff Drinks, serve as regular reminders that we’re no longer in Kansas.

To reiterate, I had no idea that Pizzeria Kamikaze wasn’t a new release, and it speaks volumes that Keret’s concept and Hanuka’s art felt as challenging and fresh as I can only assume they did in 2006. This is a beautifully designed deluxe rerelease of a cult classic that, unlike its despondent protagonist, deserves a second chance at life.