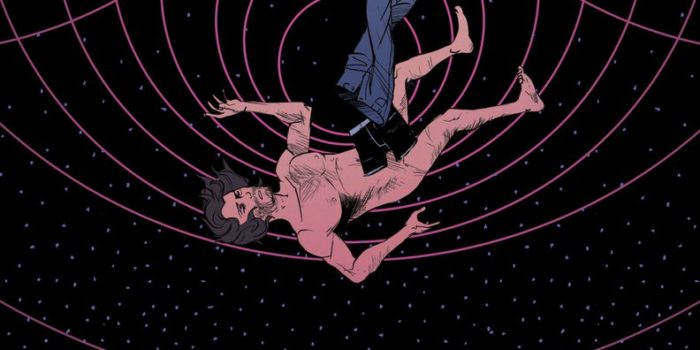 My problem with so much contemporary non-prose science fiction is that the majority of storytellers are content to work within the templates established by a dozen or so classics. Too many artists will retell the same tales set within brazen facsimiles of Blade Runner’s cityscape or Mad Max’s post-apocalyptic wastelands, or replicate Star Trek down to the smallest detail, and too many readers will settle for nostalgia for fear of trying something new. When I reviewed the first issue of Dark Beach in early 2016, it rode an early wave of comic book attempts at what I like to think of as pre-Star Wars science fiction – thinking man’s sci-fi, for want of a better term. The past few years have enjoyed a slew of similarly meditative sci-fi titles from established creators such as Jeff Lemire and Warren Ellis, and it’s invigorating to see speculative fiction being taken so seriously in what is all too often treated as a purely visual storytelling medium.

That’s not to say that Dark Beach doesn’t fulfil the quotas of its own take on tech-noir. This superior series comes complete with hard-boiled narration, VR headsets, futuristic technology and neon cityscapes, but Michael Ruiz-Unger and Tucker Tota’s concepts and themes are strong enough to make Dark Beach stand out as one of the most exciting comics currently hitting virtual stores. It’s 2355 and Earth’s surviving population lives under the domed Icelandic habitat of New Reykjavik, after our sun’s radiation became deadly and Earth was jettisoned from its orbit. Or so that’s what Gordo was raised to believe, though lately he’s been having dreams of a sun he’s never seen. To fund his addiction to a powerful drug known as Ghost Choker, Gordo moonlights as an investigative photographer, and the discovery of one in a series of murders draws him into a deep, murky plot involving a group known as “sun freaks”. I won’t spoil their conspiracy theory regarding the fate of the sun in 2060, but will say that it’s surprisingly original.

Sebastian Piriz depicts a basardised future that subsists on cannibalising the past.  New Reykjavik is essentially a large-scale version of a sixties diner. Its inhabitants dream of the natural sunlight of which they are deprived, and inherently know that the artificial rain the dome supplies is an insufficient simulacrum of something they’ve never quite experienced. Piriz’ distant but timeless future is given further substance by Ray Jones’ dualistic, other-worldy colours; Gordo’s investigation takes him through an ethereal, iridescent abyss and tasteless enclosures drenched in artificial sunlight. Gordo’s a flawed but compelling protagonist, and his drug-induced hallucinations give Dark Beach an existential and occasionally surreal vibe. Michael Ruiz-Unger and Tucker Tota’s ideas, alongside Piriz’ spectacular art, make for a sci-fi comic that’s worth anyone’s time, and the talents involved are all pushing for something so singular that I pray its conclusion delivers.

You can further explore Dark Beach on darkbeachcomic.com, where you can purchase the first two issues. The third issue will be hitting kickstarter.com on March 14th.