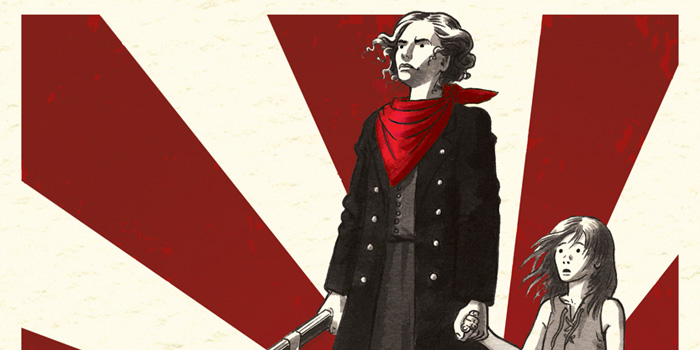 Ever since I read the beautiful The Tale of One Bad Rat, an inspired story of child abuse and Beatrix Potter, I’ve followed Bryan Talbot’s work closely and been consistently taken aback by his knack for changing style and defying expectations. The Red Virgin and the Vision of Utopia perhaps bucks that trend by being the third collaboration with equally prolific spouse Mary M Talbot, and in terms of style, subject matter and format is sort of a spiritual successor to 2012’s award-winning study of Lucia Joyce, Dotter of Her Father’s Eye, and 2014’s Sally Heathcote: Suffragette.

And dammit, I’ve begun a review of a graphic novel chronicling the exploits of revolutionary feminist Louise Michel by focussing on the male half of the creative duo. Sigh. Regardless of why or how this book has piqued your interest, I can say that The Red Virgin is possibly the Talbots’ most confident collaboration yet. This is one of those rare joint efforts to achieve that level of synergy between image and word usually only attained by lonesome creators handling every element of the process. It’s difficult to imagine where each talent’s contributions begin and end, and quite frankly I’m happier not knowing. Named “the red virgin of Montmartre”, Louise Michel was feminist, anarchist, teacher and poet who defied the Prussians during the Siege of Paris, and joined the radical socialist and revolutionary Paris Commune in 1871. Later in life, Michel was deported to a penal colony in New Caledonia, where she befriended the native Kanaks and once again proved herself as a foreword thinker and a defender of the oppressed.

The Red Virgin merges fact with fiction, and in this case nineteenth-century utopian science fiction, with Mary’s academic background and Bryan’s decades of experience in visual storytelling merging to create a multilayered narrative that is both comprehensive and whimsical. Sally Heathcote: Suffragette made striking use of orange in an otherwise monochrome world; here The Red Virgin uses red as its recurring motif, implemented to stunning effect in the book’s numerous Parisian battles.

The book also makes use of a clever frame story set in 1905, with two characters (one is another feminist icon, the writer Charlotte Perkins Gilman) recounting the grim historical events surrounding Michel and their own encounters with her. Their enthusiasm for utopian science fiction, and social progress driven by technological innovation, both lend Michel’s struggle and legacy far greater context.

This frame story was by far my favourite part of the book, even if it did occasionally teeter on a Forest Gump approach to historical depiction, in which those living in the past seem able to pinpoint future cultural icons with uncanny accuracy. But when these references later give way to literary flights of fantasy, such as Michel envisioning a colossal squid leaping from the pages of Jules Verne, or a retro-futuristic rendering of London inspired by the works of H.G. Wells, they lift the book’s more sombre scenes with a sense of joy and optimism that never feels anything less than sincere.

I guess it’s this sincerity that for me really tied the book together and made it such a rewarding read. In less capable hands, The Red Virgin and the Vision of Utopia could have been an awkward, overly worthy and didactic affair. As with their past collaborations, the Talbots have instead celebrated Michel’s achievements with a lightness of touch (for the medium at least, and I hate to have to write that) that is no less profound. The opening and closing pages, which I won’t spoil, are simply masterful.

The Red Virgin and the Vision of Utopia is available May 5th, and is published in the UK by Jonathan Cape.