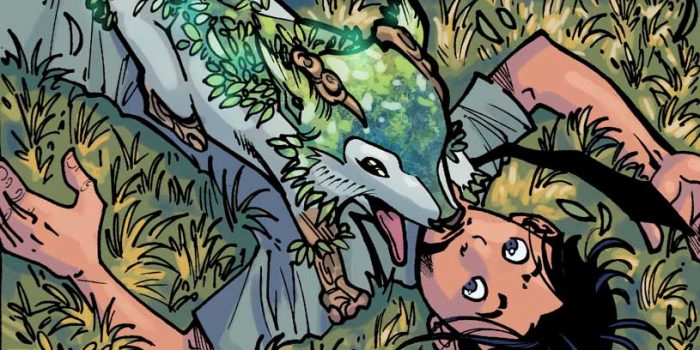 Ryan Little’s upcoming comic Lonesomes is a charming and heartfelt all-ages series, inspired by the monster collecting and emotional resonance of Pokemon. The first issue, illustrated by Eder Messias with colours by Fahriza Kamaputra, is already complete, but Ryan is currently looking to fund a print edition via Kickstarter.

I spoke to him about his love for what he calls the collectable monster genre, and why he still believes that print comics are here to stay:

In just a few seconds, what is Lonesomes about?

Lonesomes is an all-ages graphic novel, the elevator pitch would be Pokemon in the tone of something like I Kill Giants. So it plays with the collectable monster genre, and it’s about children who discover these mystical creatures called Lonesomes that are uniquely drawn to the loneliness of a specific individual.

If I’m right, Lonesomes is your first full length comic… … so why did it have to be this project?

I think this was a project that I knew I wanted to do longer, but I knew I wanted to make sure I did it right. Learning the ins and outs of comic production — how you staff a book and seeing a book from concept to execution — you learn really quickly, especially doing 6 page shorts, how a script can go from an idea you had to the execution, and how different they can look. This was a project that I always knew, once I had my chops together, was the one I wanted to do first. After doing Death Saves, which was an anthology we got a little bit of attention for, I felt it was finally time to take the leap and do a full comic.

Who is your creative team?

The team is entirely international. I’m Ryan Little, the writer based in Los Angeles, California. Our penciller/inker is Eder Messias, he’s based in Brazil, and our colourist is Fahriza Kamaputra, he’s based in [Indonesia]. We all met online through a comic book community. Eder has been published before, and Fahriza has done Mind the Gap at Image.

You’ve stated that Pokemon and other “collectible monster” games influenced Lonesomes and its creatures. Pokemon celebrated its 20th anniversary this year. What do you feel makes the franchise so enduring?

There’s kind of this saying that, in Hollywood, when people copy things they don’t always know what they’re copying. When you think of something like what I call collectable monsters, or when you think of Pokemon and Digimon, you think the fun of them is these vibrant creatures that obviously have this collectable nature to them. But what I think is really so special about these creature is that when you watch the shows they’re friends to the kids, who offer them unconditional positive regard, and I think that relationship is something that people might not even realise that they’re so appealed to. The idea that when you build your Pokemon team these are your allies through thick and thin, both emotionally and physically through battle or whatnot. I think that, whether people realise it or not, is why Pokemon has endured, and this is what I’m looking to flesh out in Lonesomes.

Will we see other Lonesomes in future issues?

Yeah, as the series goes. Right now it’s planned to be 5 issues, depending on reception maybe 6. I know there’s a million comics coming out at the moment, so I think there’s something nice about having a series with “checkpoints”, where you can end it and let it simmer and then come back to it based on interest.

Reading the first issue, one thing that struck me was how Tom’s story is clearly reaching out to young readers in a similarly lonely or depressed predicament. Do you feel that the comics industry is currently doing enough to engage with younger readers on an emotional level?

I used to teach in elementary schools during summers at college. I spent four summers teaching at inner-city schools, specifically kids with behavioural disorders, but they had a lot of emotional issues because of the socioeconomic status that came along with that. It really struck me very quickly how we would try to approach them with different techniques that were state-funded, or that the state came up with, but when we contextualised something in a comic, when I brought these kids a comic and it was Spider-man teaching them a lesson, it was just so much easier for them to dig into.

I think Lonesomes is trying to do that, to make something that is emotionally heavy palatable. I think combining it with the Pokemon genre, which has been around for 20 years and is something that people really understand, does that. I think that with a comic book you just easily empathise and you open yourself up more. You say that your reason for setting up a Kickstarter campaign is to allow people to better “read it, share it, and engage that feeling with others.” Do you see print comics being surpassed by digital any time soon?

They both definitely have their merits, but I’m gonna be super vain and say that the way I got into comics, and even people now… I share comics with them just to give them that physical medium so that they can enjoy it and dig into it.

Now that we have the internet do we think paintings are going to disappear, and there aren’t going to be museums anymore?  I think physically looking at the medium, especially when it’s a story as personal as Lonesome, and being able to take it into your space, especially now that so much of our technology has been connected to our social lives… being able to take your comics and remove them from that sphere and experience them by yourself is something that’s powerful. I think it’s something that’s unique to our industry, and I think it’s something that’s going to remain.

As you’ve said, you’ve been working in indie comics for several years now, contributing to anthologies such as Steam Punk Originals and Death Saves. What advice do you have for budding comic creators struggling to pull themselves out of that state of inertia?

I think it’s “take the leap.” Take the leap, so hard. I was doing shorts for a long time and my editor on Death Saves, Josh Trujillo, he was the one who really said to me there’s just a point where you can have this idea bouncing in your head, and it’s still never going to be real to the world. You are the only way it’s going to exist, and you’re the only person who’ll ever have that idea unless you do it. There’s just going to be a point where you have to take the leap, and I can guarantee you that the first time, no matter what you paid for it, that you get one of your comic pages you came up with emailed to you, you will know it’s worth it. That I can guarantee you with absolute certainty.

Finally, other than Lonesomes, what recent comic, graphic novel or anthology would you like to recommend to readers?

If anyone hasn’t read I Kill Giants by Joe Kelly, it’s an absolutely beautiful book. I think you’ll be shocked at how emotionally penetrating it is, but how palatable and fun it is at the same time. There’s just an ungodly amount of great comics coming out, I would argue that we’re in a Golden Age again. East of West is expansive and beautiful. Anything that Warren Ellis is rebooting these days is absolutely worth a look.

I would honestly say that the best thing you can do for yourself is walk around your comic shop, and  see what pops out at you. There’s so much available right now, so many sub-genres and sub-niches that people can really express themselves, and you’ll find something that will interest you.

Find out more about Lonesomes, and how to support a printed edition of the first issue here.