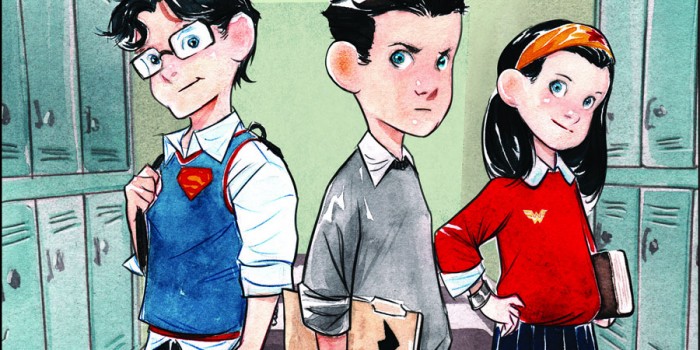 The primary reason why I continue to write reviews here at Shelf Abuse is that, as both a reader and a writer, I consistently find myself being dragged from my comfort zone. And that can only be a good thing.

So, here we go again with Secret Hero Society: Study Hall of Justice, Scholastic’s new book – and, if the final page is any indication, series. For a thirty-something comic book aficionado, Secret Hero Society requires a suspension of… not so much disbelief as continuity. These aren’t the teenage versions of the characters we know and love but entirely new iterations from a crazy alternate Earth, in which every recognisable hero or villain fits conveniently into one of two age brackets and either attends or teaches at Ducard Academy, a prep school for gifted middle school students.

You can probably work out which archetypes several of the characters fit into this just from the cover and concept. Bruce Wayne is the outsider, Clark Kent is the swot, Diana is the Foreign student, Lex Luthor is vying for class president, Joker and Harley are the class clowns, and the principal is… well, that’s would be telling.

But the nods and references go far beyond the obvious, and Derek Fridolfs clearly had a ball trying to fit every notable Batman, Superman and Wonder Woman antagonist into this world, often in the most tenuous but smirk-inducing of ways. Victor Fries, for example, handles the weather column for the school newspaper, while Jervis “Mad Hatter” Tetch teaches literature.

Though the plot is clearly aimed at a young audience, it’s these references to the DC Universe that will provide much delight for parents wanting to introduce their kids to DC’s finest, and the whole thing is so charmingly illustrated by Dustin Nguyen that it’s a difficult book to resist. Fridolfs and Nguyen were also responsible for the popular Li’l Gotham series, which featured super-deformed takes on Batman and company, and Nguyen has been drawing Marvel and DC characters in his adorable style for some time. His vibrant watercolours are missing in Secret Hero Society‘s monochrome art, which at its smaller scale and sketchier approach is presumably aiming for the manga audience, but it’s no less appealing. Mixed in with the traditional panels and speech balloons are dozens of journal entries, text messages, flyers, newspaper snippets and student evaluation reports that do a fine job of telling the story while breaking it down for li’l readers.

Secret Hero Society feels a little more focussed than Li’l Gotham, in that it’s less of an all-ages title than one unabashedly directed at children. But it’s just as much fun, and I can imagine many adult readers getting swept in by its gentle humour. I just wish I had a child at hand to test the book on.