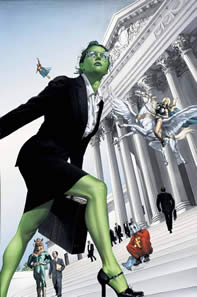 It’s not unusual for comic writers to fuse other genres with the superhero formula. Luke Cage was born from blaxploitation, Shang Chi started kicking ass when martial arts infatuated the Western World, and the Punisher exacted his vengeance against the criminal underworld (or Spider-man) a year after Death Wish exploited America’s vigilante fantasies. Though Jennifer Walters has always been a lawyer, She-Hulk’s new courtroom-centric comedy direction owes more than a little to Allie McBeal. When She-Hulk is almost simultaneously fired from her firm and kicked out of the Avengers mansion for recklessness and incessant partying, respectively, she reluctantly takes a job at Goodman, Lieber, Kurtzberg & Holliway, a law firm that specialises in metahuman cases. But there’s one catch in her contract; GLK&H are not hiring She-Hulk, but her Plain-Jane alter ego Jennifer Walters.

A veteran of licensed children’s comics, writer Dan Slott has a knack for effortlessly stressing the absurdity of the Marvel Universe by highlighting the intricacies it shares with ours. Spider-man, having finally been coerced into taking J. Jonah Jameson to court for slander, asked by the defendant why Jameson might bear a grudge against him, replies “it’s because I’m black!” Cue a jury looking at a panicky, perspiring Jameson. Single Green Female is comic gold.

Though I have always had an abashed fondness for She-Hulk, it took Slott’s new series to make me realise that she’s potentially a far more interesting, durable, and most importantly, likeable, character than her cousin Bruce. There’s a certain magic here, in both the premise and its characters. Take Goodman, Lieber, Kurtzberg & Holliway’s resident dogsbody, Awesome Andy, previously inept villain The Mad Thinker’s android henchman, who has no facial features and communicates via a small chalkboard around his neck. In just four issues Slott manages to garner more empathy for this creation than Todd MacFarlane has with one hundred issues of Spawn.

Juan Bobillo’s anime-lite pencils give the book a vibrant, irreverent tone, which only plays on the comic tone even further. There is nothing wrong with Paul Pelletier’s art, present in the final story, but it is a little generic for a title such as this. As with a book such as Powers, an animated art style really brings the nuances in Slott’s characterisation.

When recommending a mainstream book to others, I often feel obliged to question whether or not it is an essential read. Single Green Female could not be more inessential or irreverent, and is all the better for it.