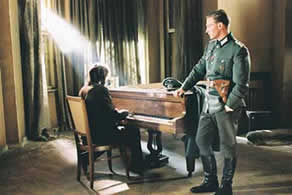 Convinced that the Second World War will soon end, radio pianist Władysław Szpilman (Brody) and his family are forced into the Warsaw Ghetto. Narrowly escaping deportation to Treblinka, Szpilman lives in hiding, relying on charity from German sympathisers. Eventually reduced to scavenging from a now levelled and depopulated Warsaw, he longs to play piano once more.

Based on the memoirs of Władysław Szpilman, Polanski’s The Pianist is the story of one man’s survival in the background of World War II. Having himself escaped the Krakow Ghetto as a child, Polanski never becomes too involved, presenting a distanced piece that would be character driven were its characters not forcibly directed by the Nazi oppression. Due to the film’s perspective the atrocities on display carry more weight than those in Schindler’s List. The Pianist begins with the German Invasion of Poland, but emphasises a level of normality within the Jewish community of Warsaw. When they are deported to the Ghettos, the Szpilmans are still convinced that the Allied Forces will soon defeat the Nazis.

Adrien Brody is superb as Szpilman, who despite the films tagline (“Music was his passion. Survival was his masterpiece”) survives not on skill or guile, but fortune and charity. Focusing on Szpilman alone, the film’s perspective dissociates it from the strained poignancy of Schindler’s List but causes his harrowing experience to fall into monotony at times.

Living in confined spaces and abandoned apartments, Władysław, the remaining member of his family, is reduced to little more than a savage, soothing his fractured sanity with imaginary renditions of melodies he once played. A scene in which he plays the piano without pressing the keys for fear of being discovered is truly heart breaking.

Though brief, Thomas Kretchmann’s turn as Captain Wilm Hosenfeld brings humanity to the emotionally deficit last half hour. Polanski boldly refuses to paint the Germans in as absolute a light as Spielberg. Outside of the ghetto, Szpilman survived on the charity of German sympathisers, and later the aid of Hosenfeld, a fellow pianist. Hosenfeld is not unlike Szpilman; a family man who longs for the war to end so he can once again enjoy the simpler pleasures.

Central characters come and go, never to be seen or mentioned again. In any other film such a detached portrayal would be ruinous, but Polanski realises that the Holocaust does not require sentiment to be compelling. Like its protagonist, The Pianist feels a little malnourished in its final hour, but is ultimately an uplifting experience.