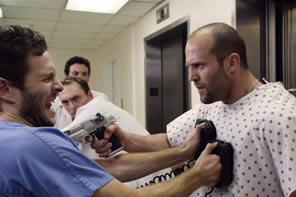 Hitman Chev Chelios (Statham) has been injected with a unique poison that will kill him if his heart slows.

Some filmmakers study the medium as one might a language, striving to understand its intricate workings. The true auteurs, like Woody and Bergmann, take their inspiration from literature and personal experience, forming elaborate fictionalisations of inner chaos. Tarentino watched films until his eyeballs dripped from their sockets, gaining a natural, instinctive feel for the craft. Mark Neveldine and Brian Taylor, the director/writer pairing behind Crank, played Grand Theft Auto III to the tunes of Linken Park for six months daily, while snorting enough coke to immobilize a herd of rhinoceros. Each to his own. In Rudolph Maté’s D.O.A. our poisoned protagonist had a week to find his killer; Crank gives Stratham little over an hour. There’s little time for characterisation, or even humanity, to hinder Chev Chelios’ brief rampage through Los Angeles. Crank is the gun-toting sibling of the morality deficient Saw or Hostel brand of horror; discovering that her supposed video games programmer boyfriend Chelios is in fact a hitman, dumb blonde Amy Smart (oh the irony) proudly announces to a passer by “my boyfriend kills people for a living!”

That Crank does nothing to hide its video game origins is all that the film really has going for it. Like its vacant “hero” the film accelerates at Scene 1 and does not hit the brakes until the brick wall ending. Crank is a shallow, brain-dead joyride, but it accepts it.

If you happen to be a member of the ADHD crowd, your attention struggling to reach the end of the next hip-hop tainted TV commercial, then Crank may be the movie for you. It won’t bore you with a plot, has no pretences about its lack of depth, and there’s enough killings, boobies, fag jokes and drug abuse to keep the mentally stunted cheery throughout.