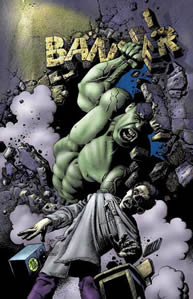 It would seem not a day goes by in the life of Bruce Banner in which he is not responsible for levelling a small town or lobbing a tank into a helicopter. By showing the aftermath of these tantrums, Banner illustrates the consequences of the Hulks perpetual path of destruction in a new light. Like those action movie car chases which whiz by fast enough to spare us the sight of the thousands potentially dead, it’s easy for comic readers to just assume that nobody gets hurts unless we witness it on-panel. On the run from the military, Banner has decided that he no longer deserves to live. He places a gun in his mouth and pulls the trigger, only for the Hulk to spit the bullet out. Like Bruce Jones’ recent take on the character, Banner is a kinetic, relevant chase movie which renders the Hulk’s destruction with a level of violence that might not be appropriate for the ongoing title.

I’ve always felt that Azzarello is better suited to mature titles such as Hellblazer and 100 Bullets, as he does struggle with writing likeable characters. While this is fine foe Banner, whose feebleness has always overwritten his morality, I can’t help feel that Doc Samson, though he has always been an egotistical genius, was never as ruthless and devoid of compassion in the way that, for most of the book, Azzarello scripts him.

Corben has a bizarre, almost hideous art style, that’s closer to the work of Robert Crumb than anyone else in the Marvel stable. Though it’s fine, distinguishable work, I can’t help but feel that it undermines the serious consequences of the Hulk’s tantrums that Azzarello is stressing.

A fine introduction to the Hulk, it’s the ending that truly defines Banner, an understated endnote that despite the Hulk’s many years of smashing will remain one of his outstanding moments.