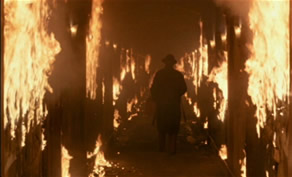 Since its critically acclaimed yet financially unsuccessful release in 1991, Barton Fink has intrigued and baffled beyond comprehension. A deceptively simple plot, laced with historical Hollywood references and allegorically hidden themes, Fink’s superlative screenplay – which the Coens wrote while struggling with the intricate gangster movie Millers Crossing – is best defined as indefinable. John Toroturro’s eponymous playwright is deliberately unsympathetic. Often condescendingly rude to those around him and arrogant concerning his work, he is a difficult character to associate with. Barton’s social realist plays depict working class men as heroes, yet Barton has no experience, and indeed little interest, in such lifestyles. His dialogue with common man Charlie Meadows is abrupt and condescending, Meadow’s tales pushed aside by Barton’s self absorbed illusions of artistic grandeur.

Fink exudes the Coen’s trademark dark humour and veiled satire. Barton’s dealings with insane movie mogul ‘Colonel’ Jack Lipnik, who never reads a single script, are surreal to say the least, and the Coen’s finest comedy work after The Big Lebowski. The usual noir principals and archetypes are all in place, and yet Barton Fink is comical, with a level of satire that escalates it above the gloomy confines of the genre.

There are many references to early Hollywood history throughout, far too many to mention (Barton is based on 40’s playwright turned screenwriter Clifford Odets, while the character of Capital Picture’s owner Jack Lipnik is an unashamed analogue on MGM mogul Lois B. Mayer) and yet the Coen’s have mixed tainted fact with their own bizarre imaginings, having Barton write a wrestling picture for real-life actor Wallace Beery, the wrestling genre in Fink’s universe being the equivalent of the western in ours.

The theme of writer’s block runs throughout. Little of Barton’s writing is ever disclosed, his furious attempts to begin typing constantly interrupted by his environment. Charlie’s (a never bettered performance by John Goodman) persistent sweating and the burning Earle Hotel add to the visual bearing of hell upon its inhabitants; Hollywood is cruel and cold, its consumption and destruction of the once talented, now alcoholic writer Bill Mayhew portent to Barton’s own fate.

The Coen’s finest leaves itself to interpretation, with many of the film’s references lost to the common man. What exactly is Barton fink all about, and is its tangled web of themes, caricatures and political statements one of the smartest films of the nineties, or a self-absorbed mess? The answer, like the head in the box, remains concealed.