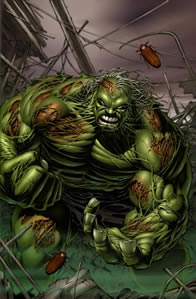 “I am the weak piston in that engine,” Bruce Banner tells himself, as he endures the torment of Prometheus in this green-skinned take on The Last Man on Earth. Humanity has long passed, and Hulk has finally found the solitude he’s long sought. The details of man’s extinction are never given; the world’s superheroes were not able to save man from his greatest enemy, himself, we are told. Somehow, the Hulk’s indomitable metabolism has not only slowed his aging but kept Banner alive for almost two-hundred years.

Peter David writes the Hulk better than anyone, but his talent has often been stretched in continuing such a limited character. The camera that incessantly follows Banner, sent by The Watchers to record archival footage for other planets to learn from our mistakes, is an excellent idea, and the information that the Krees and Skrulls have put temporarily put aside their differences to celebrate Earth’s passing is a quirk of fate only David’s cynical wit would devise.

Dale Keown is always a welcome addition to the Hulk, if for nothing more than the memories of the 90s collaboration with Peter David his art conjures. His ripped, veined Hulk is almost painful to witness at times, ever on the brink of exploding.

The End is a good book, but like most of these alternate future plotlines, it’s difficult to get excited about events that will never transpire. As with The Dark Knight Returns, the book acts as a fitting epitaph to the character, but unlike Miller’s effort, it forfeits everything that (once) made the goliath so much fun.

As Banner passes, the Hulk’s ironically lonely existence has an immense poignancy about it that many similar books do not. For the first time in his existence, the big green guy is on his own.